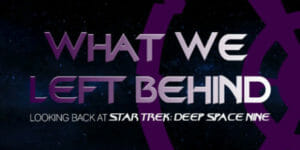 Star Trek has been a pop culture juggernaut for well over 30 years. The original series would take some time after its cancelation to become the phenomenon it’s known as today, and after a fashion we saw new shows beginning to come about starting with The Next Generation. With this show, it would once again take a little time to gain any traction because fans wouldn’t accept anything that didn’t have the original crew, but once they became accustomed to this new cast and crew of the Enterprise-D that series would also spawn a new generation of fandom. Later Star Trek shows with starships exploring the galaxy would premiere, but the one series that stood out from the rest of them is Deep Space Nine.

Fathom Events presented a special theatrical viewing of the documentary What We Left Behind, which is slated to be released on home video August 6th from Shout Factory. Producer Ira Steven Behr narrates this documentary about this unusual series, and from the beginning the film shares all of the negative reactions the show initially received. Featuring all of the cast we are treated to a variety of scathing reviews and comments about everything that is wrong with Deep Space Nine from it’s concept and in to the first season of the series. Drawing from conversations with cast and crew, as well as commentary from fans, Behr starts to paint a picture of what this series was about, what were the initial ideas for some of the cast, and how the characters themselves ended up dictating the overall direction of the series. From an editorial standpoint it appears to just jump all over the place, but after a time a clear narrative starts to emerge. Behr presents the viewer that, despite primarily taking place on a space station, this series contained all of the heart that made Star Trek so popular with fans, starting with a captain who was a man of color, only to be followed with how he was surrounded by women of incredible strength and character. The documentary interview segments with Avery Brooks who played Captain Benjamin Sisko, along with Behr interviewing Nana Visitor (Kira Nerys) and Terry Farrell (Jadzia Dax) as they shared their experiences with the characters they played. That would be followed up with some wonderful added commentary from fans, either at convention appearances or through video recordings, expressing how these strong female characters would go on to inspire a new generation of future female scientists. 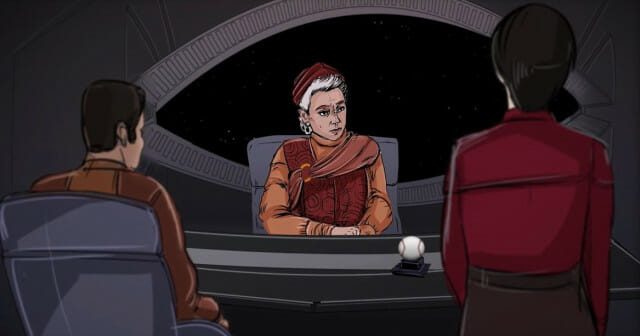 The documentary also has one other jewel going for it, that being a group of writers, headed by Behr, tossing around an idea for a fictional episode had DS9 gone on for another season. Through a conversation with ideas being thrown about and then written down, along with illustrations and simple animation, a story is presented about what life would be like on the station some 5 years after the events of the series’ final episode.

This documentary doesn’t take itself all that seriously. From its opening with Andrew Robinson (Garak) it is filled with moments ranging from mirth to outright irreverence. One memorable moment is a slightly contentious conversation between Visitor and Behr about a proposed romance with the character Nerys that had much of the audience laughing pretty loudly, proving the fact that the people who make up the cast and crew are indeed a family in the truest sense of the word. It’s an idea that is further driven home by Cirroc Lofton (Jake Sisko) as he describes his relationship with Avery Brooks in a moment that was very heartfelt and touching. However, one rather serious and even self-referential moment came about when Behr was checking off some of the topical successes in addressing a number of social issues. When the issue of sexuality came up there is a wonderfully validating point made by Behr saying that they cannot take credit for addressing sexuality as it pertains to the LGBTQ community. It is true that there was one episode where it was approached in a somewhat veiled manner, but out of 7 years that would be the only time the series would touch on it, and because it was never addressed fully and more frequently the show cannot take any credit in covering that specific area of potential diversity. 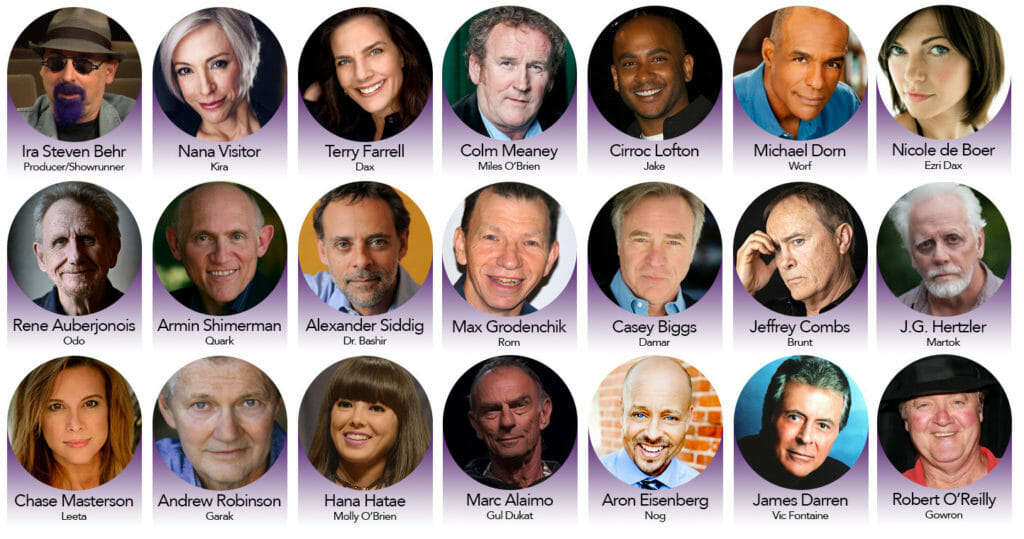 What We Left Behind presents a wonderful opportunity for beloved actors to come together and share their thoughts, their laughter, and even their tears, about what Deep Space Nine has come to mean to them through working on the show as well as the contact they have made with fans. This funny, thoughtful, and even beautiful documentary is a love letter to the fans who love Deep Space Nine. This is made for them, which makes perfect sense since it was crowd-funded by them. As an added bonus the documentary features roughly 20 minutes of DS9 footage spread throughout that has been lovingly re-mastered from Standard Definition (as it was broadcast on TV at the time) into High Definition for this documentary. While there are currently no plans for the entire series to be given this same treatment, just watching these carefully selected scenes in hi-def makes this documentary worthwhile, but Behr also shows that he’s an excellent interviewer in getting some very personal and even candid moments with many of the cast. Ultimately what this documentary does is show that Star Trek: Deep Space Nine is indeed worthy of being considered a part of the Star Trek family, and as many fans in the documentary proclaim, is possibly the best of the post-original Trek series.

Final verdict? What We Left Behind is a marvelous documentary that is original in its approach, is highly entertaining, and extremely touching. In other words, when it comes out on Blu-Ray it deserves to sit right next to any boxed set of Star Trek: Deep Space Nine on the shelf!