The official description for The Souvenir is…interesting. It starts, “A shy, but ambitious film student, (Honor Swinton Byrne) begins to find her voice as an artist while navigating a turbulent courtship with a charismatic but untrustworthy man (Tom Burke).” Ordinarily, I let it lie but people going in to see this film without looking it up won’t come away from the first act with this impression. It may have been their intention to build a character study of a young woman finding her way while dealing with serious personal upheaval but that’s not exactly what happens on screen. 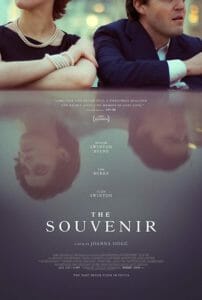 Julie (Honor Swinton Byrne) comes across as shy but not timid. She seems interested in living a full life. She wants to go to film school and tell stories beyond her own life experience.  Just as she’s beginning the admission process for film school, she meets (what is supposed to be) a charming older man at a party she hosts in her apartment. It’s unclear what brought the two together but it’s becomes apparent that he’s hardly the man he presents himself to be. This “courtship” slowly turns all-consuming.

Julie’s naivete allows Anthony (Tom Burke) to worm his way into her life so deeply that she doesn’t seem to know how to dig him out. But this portion of the film tells this story by putting Anthony and his drama front and center. This stops being a story told by Julie and becomes a story happening to Julie. The story remains engaging and tragic on many levels. But it feelings like you’re just watching Julie dragged pillar-to-post rather than experienceing her learn and grow.

There’s very little active story arc about her separate from what’s going on with Anthony. On one level, it shows how much of her energy and life this man consumed. But without the other parts of her life front and center, Julie’s pain and losses are treated as almost an afterthought. As though the impact and mess this relationship makes of her dreams are somehow of lesser importance because it doesn’t revolve around Anthony. And that’s where this film fails both the audience and the hauntingly nuanced performance given by thits lead actress.

This relationship literally tears Julie’s life apart. It causes her to lie to her devoted mother Rosalind (Tilda Swinton) about money, school, but most especially the nature of her relationship with this older man. There were so many missed opportunities to explore this relationship and give greater context to the type of woman Julie is it’s a let down to realize that’s not considered an important part of her journey. Julie is passive and it undermines fundamental aspects of her character and this story as a result. After a while, her behavior is more than a little unbelievable but that’s because we’re viewing too many events in her life are happening in isolation or solely as a consequence of something actively happening with Anthony. It made for unnecessarily disjointed moments that snapped the narrative tension.

This film has lessons to teach and an extremely poignant and personal look at a young woman trying to find herself and her voice. Acclaimed writer-director Joanna Hogg provides a distinctive, if dreamlike visual, narrative that more than holds your attention.  That’s both the film’s blessing and a curse. Because it’s a beautifully shot and stunningly rendered narrative the severely narrowed lens through which robs the story of much of its emotional potency and its lead of a significant amount of agency.

This is a story purposefully asks more questions than it answers.