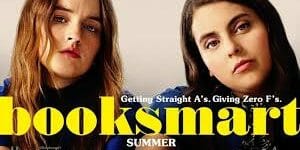 I like comedies plus I was the nerdy girl who didn’t really party at all in high school. The concept for this film immediately struck a chord of sympathy from that long lost nerdy teenager inside me and I wanted to see this movie to see the escapades that the pair of teenagers get up to on their last day of high school. Not only was this outrageously funny but it was also authentic with some real insights into the images we have of our classmates when we’re young and full of surprises with secondary characters that are as funny as the main characters.

Directed by Olivia Wilde and from a screenplay by Emily Halpern, Sarah Haskins, Susanna Fogel and Katie Silberman, the film is about two best friends, Molly (Beanie Feldstein) and Amy (Kaitlyn Devers), who have spent their entire lives studying only to realize they should have spent more time having fun like their peers. They decide to cram four years of partying into their final night before graduation. Both girls discover truths about themselves, each other, and their high school peers during their night of fun.

One of the best factors in why this film works so well is how genuine it is. It stays true to so many of the experiences young adults have in discovering who they are and who they are in relationship to their world. It highlights this through the female voice, allowing both young women to be honest, silly, raw, powerful, and emotional. The situations are authentic to women everywhere, straight or queer and I adore that the filmmakers have such a diverse cast of teenagers. This diversity is one of the most powerful elements of the movie but is never used as a crutch for the humor. Molly and Amy are equal in their level of experience, as are the secondary characters. And it is when both take chances and expand their horizons, along with their perceptions of their classmates, that both learn and grow as people.

The humor is ridiculously funny. It is very situational but also character based. It is the wide diversity in the cast that brings the comedy alive, each character adding an element of quirkiness to the storyline. Molly and Amy’s search for fun brings tons of laughs but so do their interactions with the other people around them, each unique and silly. From Principal Brown (Jason Sudeikis) to Lisa Kudrow as Amy’s mother, the cast is full of actors capable of adding layers of humor. Two of the best examples are Billy Lourd playing Gigi and Skyler Gisondo as Jared. Both appear throughout the film, providing not only laughs but moments of insight for Amy and Molly. A lot of humor is silly but there are surprises that just caught me by surprise and had the audience laughing out loud.

The acting is brilliant. Kaitlyn Devers is sweet and emotional as Amy, trying to figure out her place in the world and how to balance who she is becoming against her desire to be there for her best friend Molly. Beanie Feldstein is brilliantly funny as Molly, but also beautiful as she comes to clarity over her preconceived notions about the people around her and even about her best friend. The chemistry between the pair is just gorgeous, the caring what you would want to see between best friends. Skyler Gisondo combines genuine caring and hilarious humor into his character while Billy Lourd is perceptive and wild. Secondary characters, such as Mason Gooding as Nick, Jason Sudeikis as Principal Brown, Victoria Ruesga as Ryan, Austin Crute as Alan, Diana Silvers as Hope, Molly Gordon as Triple A, and Eduardo Franco as Theo are all equally talented, adding to the layers to the film of diversity but also quirky humor.

Ridiculously funny, Booksmart will have audiences laughing, even when they don’t expect to. The twists and surprises will make you laugh as much as the situations both girls find themselves in and the emotional moments will recall your own high school days. The film is both perceptive and funny, an unusual change on the usual coming of age story. If you like comedies, enjoy unusual and diverse characters, and like stories about young women, this movie will be one that you will most definitely want to see. I loved all of the above but especially the great cast and the incredible writing.