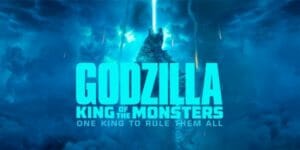 Five years have passed since the world publicly learned of monsters, specifically the existence of Godzilla and the M.U.T.O.s, which saw them battle horrifically as the M.U.T.O.s existence threatened all life on Earth, and Godzilla arose to put a stop and apparently restore some semblance of balance. Three years later the organization known as Monarch went to a place called Skull Island for not so altruistic reasons, only to discover that the King and protector of that island was a giant primate known by the natives as Kong. Now it’s 2019 and world governments are in an uproar regarding what to do with these monsters, now known as Titans. There are some that want to see them all destroyed, while there are others that feel they should be left alone. Research has shown that they’ve been alive on Earth long before man, therefore they are part of Earth’s “natural order.”

Monarch has been trying to study them peacefully in hopes of creating a system that would simply ward them away from populated landmasses. This has been accomplished through a device created by Dr. Mark Russell (Kyle Chandler) and his ex-wife Dr. Emma Russell (Vera Farmiga). They also stand wildly opposed as to what should be done with the Titans. Emma appears to want to study them, while Mark wants to kill them all, due to the loss of his son during one of Godzilla’s battles with the M.U.T.O.s five years earlier. Enter eco-terrorist Jonah Alan (Charles Dance) who has some even more extremist views of his own. He apparently kidnaps Emma and her daughter Madison (Milly Bobby Brown) with the idea of releasing all of the Titans one by one. It is here that they discover something they don’t understand, for encased in a gigantic block of ice deep in Antarctica lies King Ghidora, the ancient three headed dragon that inspired many of the dragon and hydra legends of old. They deliberately free Ghidora, only to realize that it doesn’t follow the pre-conceived rules of the Titans. It apparently has its own agenda, for Ghidora awakens a number of other Titans, including the legendary fire demon Rodan, and looks to destroy all life on Earth; that is until something rises from the depths to stop it.

When Godzilla was released in 2014 there were some incredibly high expectations that the Big Guy would finally be given a proper American treatment given the debacle that TriStar Pictures and Sony put out in 1998 that left many Kaiju fans sorely disappointed (including yours truly), and while the treatment of Godzilla in the 2014 movie was more in line with the beloved monster from Toho Studios in Japan, what we saw was very little of the Big G. There were battles between Godzilla and the M.U.T.O.s, but they were kept to a minimum and in one case, even happened off-screen. It was felt by director Gareth Edwards that Godzilla’s appearance should be a slow-build, which unfortunately gave us a monster movie with comparatively little monster to show for it. Not so with Godzilla: King of the Monsters. Much like Jordan Vogt-Roberts approach with Kong: Skull Island and giving the giant primate an early reveal with plenty of screen time, director Michael Dougherty also wanted for plenty of screen time for Godzilla as well as the other Titans that were to do battle. After all, what’s the point of having a monster movie of this type if we don’t get to see them fight a lot, yes?

The cast for this film is largely ineffectual here. While the characters have some small role to play, for the most part they really don’t create a sense of interest. Their acting is as good as it could be, but how does one deliver an Oscar worthy performance when you’re playing second fiddle to a Kaiju? Simple… You don’t! Nonetheless the performances of Chandler, Farmiga, and Brown were solid enough to carry their roles through. The movie does bring back Ken Watanabe as Dr. Ishiro Serizawa, and his is one of two voices of reason given his character’s understanding of the nature of Godzilla. Again, there is nothing that would see his performance receive any acting award nominations, but he does bring a certain gravitas to the role, thereby giving his character an increased sense of credibility. The other voice of reason is provided by actress Ziyi Zhang as Drs. Ilene Chen and Ling. Yes, she plays twins (although never seen together in any scene). Her characters have a certain wisdom that almost has a mystical nature, particularly Dr. Ling as her character oversees the rising of Mothra, Queen of the Monsters. More on that later.

Zhang’s performance is the perfect counterpart to Watanabe. His is strong and forceful, almost like Godzilla. Zhang’s is gentle, but still with a beautiful strength, much like Mothra. Together they almost serve as the human voices for both the King and Queen of the Monsters. Lastly there is Charles Dance as eco-terrorist Jonah Alan. Playing heavies is nothing new to him, going as far back as Sardo Numspa in the 1986 comedy The Golden Child, to more famously and recently Game of Thrones as Tywin Lannister. While he can deliver the goods, here he felt underused. His performance was chilling, but throughout the majority of the movie he began to feel irrelevant, as if his character was simply a cheap plot device, which I found disappointing given the weight this actor brings. It wasn’t until the VERY end of the movie that we are shown something that might very well redeem, not the character, but his lack of proper use.

Godzilla: King of the Monsters is practically everything that I could want in a monster movie. In addition to seeing plenty of Titans doing battle and wrecking havoc, this movie is LOADED with Easter Eggs and tips of the hat to past Godzilla movies from Toho Studios. Most notable is the score, which is written by Bear McCreary, although he did use a number of themes written by legendary Toho composer Akira Ifukube, which included the extremely famous three tone motif that always signifies Godzilla’s march into battle. Those moments was so perfectly placed that I quite literally found myself grinning like an idiot and feeling like a little kid again as I watched my very first Godzilla movie (which was coincidentally Monster Zero). Then, when the introduction to the Titan Mothra occurs we are treated to an orchestral version of the famous song that came from the 1961 Toho movie Mothra (or more properly Mosura). There are other Easter Eggs including a reference to a device that was mentioned in both the original 1954 movie Godzilla as well as the 1995 movie Godzilla vs. Destroyah; a reference to the twins Chen and Ling, and their whole family of twins that has a connection to the ancient Titan Mothra; and lastly a terrifying visual that hearkens to William Friedkin’s The Exorcist. 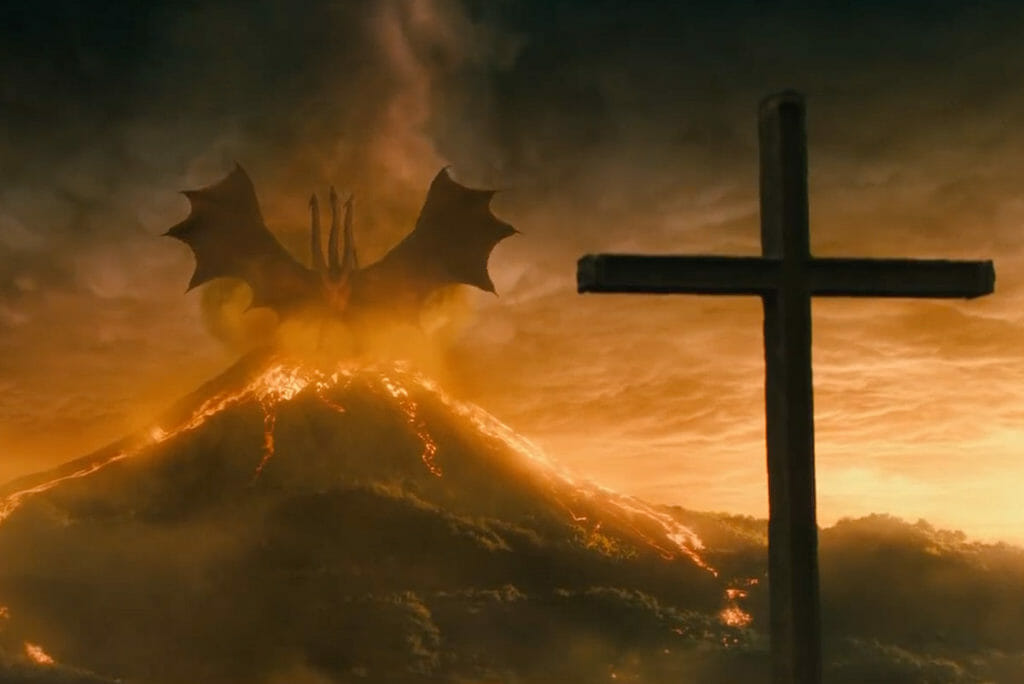 As for Mothra herself, her portrayal was of the most interest to me, although I could not imagine the way she would be used here. The movie also suggests that there is more to her than meets the eye, as something rather mystical quietly happens right as she’s about to emerge from her cocoon, suggesting another acknowledgement to her very nature as presented in later Toho movies. It certainly does give more credence to her being referred to as “Queen of the Monsters.” 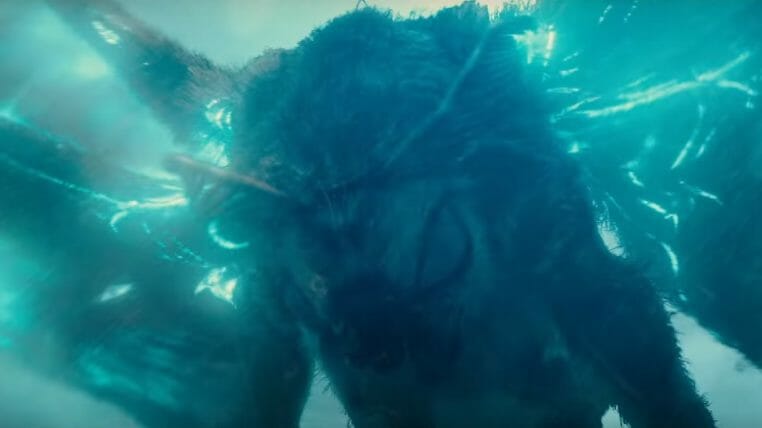 As the final credits began to role I found myself giving this movie at the least 1.5 strikes against it, partly because of the aforementioned use of Charles Dance, but because I know better than to leave a theater until the house lights are up and the cleaning staff are kicking everybody out, I can tell you that it is in your best interests to stay until the VERY end, because there is an after credit scene that not only (hopefully) legitimizes Jonah Alan’s presence, but could add a nice twist to the upcoming 2020 movie Godzilla vs. Kong. That leaves only one strike, and that is this movie is visually dark. Much of the monster battles happen in stormy weather making it difficult at times to actually see what is happening, especially as Godzilla battles Ghidora. While I could make out enough of those fights to allow myself to become emotionally engaged (and boy did I), I would have preferred it if at least the climactic fight between Godzilla and Ghidora had been in a somewhat brighter setting.

For it’s dark scenery, but otherwise plenty of monster scenes and incredibly engaging battles, I give Godzilla: King of the Monsters 4 out of 5 Titans!!!

2 thoughts on “Ben’s Breakdown | “Godzilla: King of the Monsters” roars and finally has bite!”