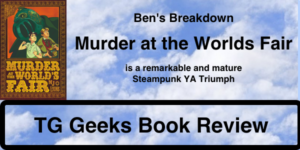 It is 1893 and the City of Toronto (in Canada) is hosting the World’s Fair.  There is a man named Norwood Quigley, and he is the younger son of the famed Quigley family whose father is a remarkably successful businessman in the area of industry. Norwood is eager to establish a name for himself without riding on his parent’s coattails. He had been given a camera as a gift and decides he wants to be a journalist. After snagging an interview (with photos no less) with the elusive genius inventor, Mr. Tinker, he’s hired on at a newspaper as a writer/reporter. Because of his family’s business connections he has a chance to cover parts of the World’s Fair right there in Toronto, which includes this wonderful steamship called Hanlan’s Pride, but when trying to find the cabin his father is staying he accidentally stumbles on to what appears to be a murder of a Prussian Ambassador by a Chinese boy roughly Norwood’s age. Naturally the boy, whose name we eventually learn is Jing, proclaims his innocence and it’s up to both Norwood and Jing to find the truth regarding the murder. As they do they discover that there is something far more nefarious and complex going on involving secret societies, shadow organizations, and possibly even a plot to start a World War, and Norwood begins to fear that the truth is far closer to him than he originally imagined.

Author MJ Lyons had already established himself as a writer in a number of areas, but Murder At the World’s Fair is his first attempt at a novel. Not many writers with their debut novel can hit it out of the park. Lyons doesn’t just hit it out of the park. He hammered a Grand Slam. From the outset this book almost reads like a journal. Lyons uses the First Person POV and makes Norwood the writer and narrator of this fantastic tale. However, one chapter in and I actually forgot I was reading a work of fiction from some contemporary writer. Instead the work presents itself in the most amazing Victorian style. It isn’t so much in some of the spelling, but the grammatical structure and prose used in here is unquestionably remarkable. For someone so young he writes with a style and maturity that is way beyond his years, as if Lyons housed a very old soul within himself. He also possesses a remarkable sense of vision for the detail that goes into his world building is unlike anything I have seen. As for the plot itself, Lyons has given us one of the most enjoyable murder mysteries to come along in a very long time. Told with the type of complicated panache one might expect from Agatha Christie, the twists and turns that this story takes will leave readers breathless and eager for more. But if that weren’t enough, the icing on this multi-layered cake is comprised of its rich cast of characters, especially with Norwood and Jing. The way these two characters interact on the page with each other feels like a tennis match at times. Keep in mind that this is a book with gay sensibility, so while some relationships and characteristics are inferred there are others that are explicit with who they are. I say this because this is not just a steampunk murder mystery, but there is also a same-sex love story that emerges during the course of this adventure.

In short, Murder At The World’s Fair is all these things and more, and for MJ Lyons this book is a triumph!!!


We welcome your comments and feedback below. If this is your first visit, be sure to read the Privacy / Terms and Conditions Of Use. And Please, Play Nice.