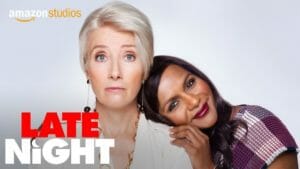 Katherine Newbury is the first woman to host her own late night talk show. In fact she has been hosting for upwards of 30 years. Unfortunately her last 10 have seen a steady decline in rating and popularity. It’s gotten to be so bad that the President of the network wants to phase her out and replace her with fresher, younger talent. So, in an attempt to try to change her image she hires the first woman, Molly Patel, who has applied for a job on the writing staff. However because of Molly’s total lack of experience with working on a late night talk show the ideas and jokes she brings to the table border on unorthodox, at least for the likes of Katherine and her all male writing staff. However, Katherine starts to see a bit of genius within Molly and finds herself leaning on Molly with greater frequency, at least until a bad scandal regarding Katherine hits all forms of social media. Can Katherine keep her job as well as save face in front of the television nation?

On the surface this looks like it could be a very funny movie, especially given that the brilliantly talented Emma Thompson is playing Katherine Newbury. Add the likes of Mindy Kaling as Molly Patel, and John Lithgow as Katherine’s husband Walter Lovell and we see the potential for some really strong comedic moments. Sadly we don’t get that. Instead we start to see a movie that tries to deliver a message about the treatment of other people in the workplace, and even possibly a message about sexual relationships in the workplace along with a dash of misogyny. Unfortunately Late Night doesn’t even dare to go that far. Instead it tries to straddle a line between boldface comedy and situation comedy, almost as if writer Kaling and director Nisha Ganatra were collectively too afraid to alienate people with a strong message (thus turning Late Night into a strong sitcom movie), or lose any substance by going too far with the comedic element and risk turning it into a satire, or even a parody. What we end up with is a film that doesn’t know what it wants to be. The movie does have its share of laughs, and it does have plot points that raise good questions, but neither of them are strong enough to carry this movie through. Instead it trips over itself as it alternates from comedy to message and then back to comedy again.

Any saving grace would have to come from its cast, and most of that rests with Thompson, Kaling, and Lithgow. There are many other cast members, but they are treated with a sense of fluff and end up not being taken all that seriously. Thompson’s character of Katherine Newbury felt as if she were to hearken back to The Devil Wears Prada’s Miranda Priestly, with Kaling taking on a somewhat comedic version of Anne Hathaway’s character Andy Sachs. Unfortunately by trying again to make this movie light we see some of the weight of the character of Miranda get lost. While Miranda is something of a sad Devil, Katherine comes off as just unnecessarily mean, and where Andy grows into her role working for Miranda, Kaling as Molly simply presents us with someone who quite literally stumbles into her job, clumsily bumping herself around into some form of accidental success. The only character that shows any sort of resonance is Lithgow’s Walter Lovell, the husband to Katherine. Lithgow, who has given many brilliant performances in a variety of both dramatic and comedic roles, comes off as a wise, sensitive, and extremely supportive husband to Katherine. Throughout the movie we get a sense of why he is the person we see, and what it is that made Katherine fall in love with him. Lithgow’s performance is the only one here that had any sense of verisimilitude, and it is his performance that made the character of Katherine Newbury barely tolerable.

One other element of Late Night that did not come off well is the editing. If you watch any late night talk show and the host is giving the monologue you will hear a certain sense of timing as to when, and even how, to deliver the joke while the audience is laughing. Instead we hear dialogue inappropriately delivered during moments of laughter from the audience in the movie that feels disingenuous (it didn’t help that the monologue jokes were TERRIBLE), and that only serves to put to much of a focus on this poor editing.

Late Night is a movie that had a great deal of potential, either as a riotous comedy, or as a very strong sitcom with a powerful message. Instead by failing on both counts it is nothing more than a movie that rises only to the level of mediocrity.

Late Night receives 2 out of 5 laughs.