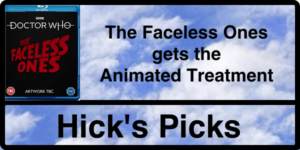 Editor Note: Michael has a new Pick for us today.

Anyone who is a classic Doctor Who fan knows that most of the Second Doctor’s (Patrick Troughton) episodes are missing or incomplete. So, it is nice to see the BBC doing the animated versions similar to what they did with Shada.

Let us know what you think in the comments section below. As always, we welcome your feedback on all of our content.

Clear some space on your classic Doctor Who shelves. Another lost serial from the second Doctor’s era will be getting animated for release in 2020.

BBC Studios announced this week that Patrick Troughton’s six-part serial “The Faceless Ones” will be released on DVD and Blu-Ray in 2020. Written by Malcolm Hulke and David Ellis, “The Faceless Ones” features the final appearance of Michael Craze and Anneke Wills as companions Ben and Polly.

The newly animated serial will be similar to this year’s release of “The Macra Terror” and will be a reimagining of the classic serial using original audio, telesnaps from the release and the two remaining episodes in the BBC archives. Episodes one and three will also be released on the DVD set along with other supplemental material from the serial.

The story is a set at London’s Heathrow Airport and features the Doctor, Jamie, Ben, and Polly facing off against identity-stealing aliens.

The eighth serial from Doctor Who’s fourth season is the fourth story to be restored by BBC Studios. The others include “The Macra Terror,” “The Power of the Daleks,” and “Shada.”

Episodes one and three have been previously released on DVD as part of the “Lost Years” box-set.

The final release date isn’t available, but we’ll update you that news breaks.

Fans in the United States may have to wait longer than those in the rest of the world to add this serial to their shelves. While “The Macra Terror” was released in the U.K. in late March, it’s release date for U.S. viewers is October.

However, U.S. fans can take some comfort that several out-of-print classic Doctor Who serials will be re-released this summer.

BBC Shop is bringing back ten DVDs as part of their “on demand” program.

The first set will be released on June 25 and include “The Time Meddler,” “The Krotons” “The Three Doctors: Special Edition,” “Planet of the Spiders,” and “The Sunmakers.”

The second set will be released on July 9 and include “The Invasion of Time,” “Frontios,” “The Mark of the Rani,” “The Happiness Patrol,” and “The TV Movie: Special Edition.”

You can pre-order copies at the BBC Shop.