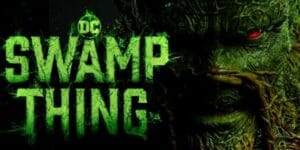 Before I, the writer, delve too deeply into the murk and mire of this review, I’m going to ask a couple favors from you, the reader. One, I’m going to ask you to ignore all the craziness that has plagued the series over the past few months: this season was shortened by a couple episodes, the series got cancelled after the first episode, North Carolina either owes or is owed money…I’m not even sure about that last one. I’m not asking you to pretend none of it exists. I’m just asking you to ignore it for a few minutes, and give the series a chance to stand on its own merits outside of the “controversy”. Second, I’ll share the fact that I’m not a huge Swamp Thing fan. Oh, I know enough to be dangerous. I’ve read (and enjoyed) “The Anatomy Lesson”, seen all the movies and some of the television series from a decade or two back, and I’m up on all the lore that surrounds the character. But I can safely say that of all the series announced with the new DC Universe app, I was least excited about this one. So if, when we’re done, you find you disagree with my assessment, feel free to chalk it up to that age-old internet paradigm of me not being a “true” fan. You have my blessing. I’m happy to take the hit.

Sound good? Then let’s dig in…

Unlike the fast-food quick hit pace of Titans, or the stir-fry randomness of Doom Patrol, Swamp Thing is…or should be…a stew. It’s something you put on the stove and let simmer for a good portion of the day, and when it’s finally done you’ve had some good eatin’. Story elements need to take their time, with no easy or pat resolution in the 55 minutes of each episode, and it’s to the creator’s credit that they clearly understood all this going in. While some fun stuff happens, there really isn’t a “wham” moment that defines the tone of the series in a quick soundbite or a blink-and-you-miss-it clip – anyone expecting a “F*ck Batman” or a flatulent donkey in the first episode could perhaps be forgiven if they’re disappointed – because there isn’t supposed to be. Sadly, that may be the very thing that works against it. In the war for viewers’ eyeballs in our video-on-demand world, this gradual build may test their patience.

Which is a shame, because there’s real potential here, but unfortunately that potential seems to be squandered on a bunch of missed opportunities. The central character of the show is not Swamp Thing himself, or even Alec Holland, but his friend/love interest Abby Arcane. Smart move getting Crystal Reed (Gotham) in the role. She’s a talented actress who’s could have brought a lot of depth to Abby’s character, if only she weren’t playing such a poor version of her. A noted (by other characters) brilliant Center for Disease Control scientist, she admonishes the local hospital staff not to enter a potential contamination zone without masks and gloves…then promptly marches in without them to examine a patient. Reed still manages to do a good job with what she’s given, and three episodes in remains an interesting, if not particularly well-written, character. 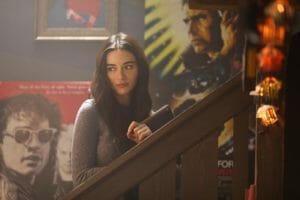 The series itself is pretty much a mish-mash of brilliance versus what-were-they-thinking. I mean damn it’s great to watch Virginia Madsen play Maria Sunderland, stealing every scene she’s in. Jennifer Beals also shines in her role as Sheriff Cable, keeping order, her son, and a clandestine affair all in line in a complex juggling act. Ian Ziering manages to shrug the Sharknado off of him long enough to give us a Daniel Cassidy (aka Blue Devil) I’d like to see a bit more of. Even the over-the top performance of Kevin Durand as Jason Woodrue (hopefully soon to become the Floronic Man) is perfectly fitting with what I’ve read of the character in my funnybooks. Unfortunately, these great performances are drug down by the no-so-great. Andy Bean is pretty much phoning in his Alec Holland. Admittedly, you don’t need to have a great Alec Holland to necessarily have a great Swamp Thing…you just need a great Swamp Thing (more on that in a minute). He just seems bored, or maybe just boring, in the role. Perhaps that was to give us a nice contrast to when he becomes the big green behemoth, but it was pretty difficult to accept that this was going to be the hero of our series.

Will Patton isn’t doing anybody any favors in his portrayal of Avery Sunderland.  Channeling Burt Reynolds in his performance as Senator David Dillbeck from Striptease, he attempts the affably-charming Southern gent who’ll pat you on the back as he sticks the knife in. I’m from the South. It’s a legit stereotype, but Reynolds was doing it for comic relief. Patton, in tapping that same vein, makes a character who should by rights be a scarier monster than the Swamp Thing itself into a sad parody. The only thing missing is the string tie.

Okay, but is the actual Swamp Thing any good? The effects crew do a wonderful job tying Alec in the green as Derek Mears takes over from Andy Bean and becomes the monster in the “suit”. I put that in quotes because I’m sure it’s as much CGI as it is Mears in a big green suit. And that’s a good thing. One point all the Swamp Thing books I ever read tried to hammer home is that the plant world is brutal. We can say the animal world is kill-or-be-killed but in the plant world it’s stone-hard fact. This show doesn’t forget that. Swamp Thing, once he begins to figure out who or what he is, becomes an absolute force of nature, ripping a bad guy apart at the appendages. And yet, in the very next episode, he shows mercy to a resurrected and vengeful version of that human, somehow freeing his soul from a rather unique sort of torment. It’s apparent a question that was often a big part of the earlier books and shows will be in play here: is Swamp Thing a man playing at being a plant or a plant playing at being a man? As it should be…that’s part of the real definition of the character. 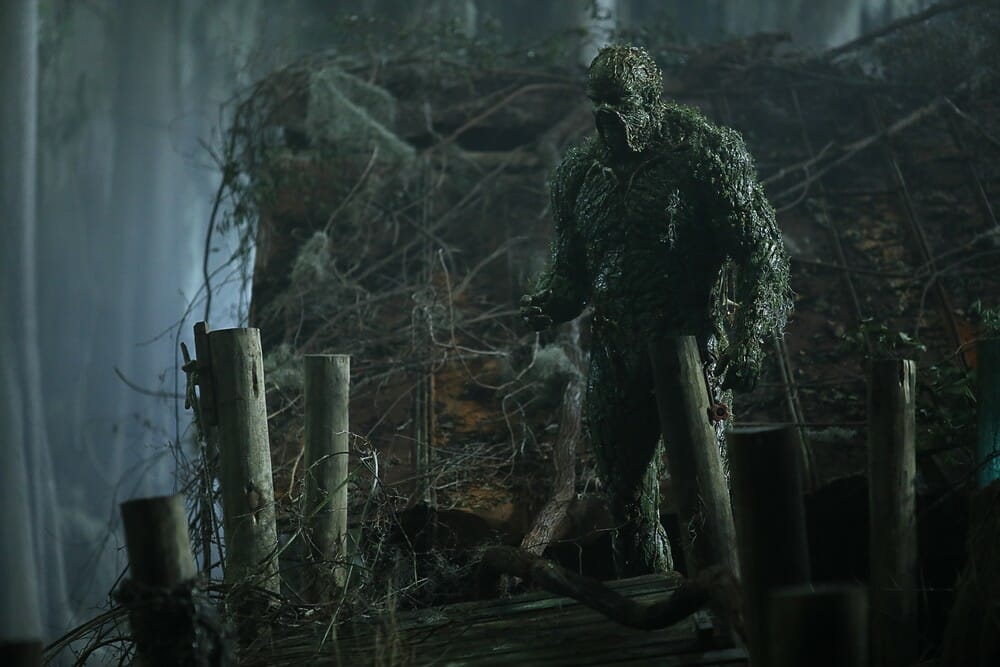 Swamp Thing, in my opinion, is going to be enjoyed much more in hindsight than it might be right now. It’s a show that should be binge-watched, when the slow build it’s trying to create can be savored over the long haul, not in weekly installments. Good performances go to war with bad ones, depending on the actor (and, to be fair, the writer writing them). I won’t go so far as to say this is the first chink in the DC Universe’s armor, because at the end of the day this is still a show worth your time, but it hasn’t become a “must see” show for me in the way Titans and Doom Patrol were. I think it might have worked better for DC if they’d released the entire series at once and allowed viewers to watch it at a pace of their choosing, a la Umbrella Academy on Netflix. As mentioned before, Swamp Thing has a lot of potential, but I don’t think we, the viewers, are going to see that potential recognized.