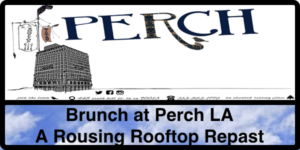 The Two Gay Geeks were in Los Angeles for Ben’s birthday celebration as well as an event we were attending on Sunday evening in West Hollywood. We had all day Sunday to lounge around and enjoy ourselves so we asked a good friends (Michael and Della Cowan), who are also foodies, where we should have brunch in the downtown LA area. They suggested several places, but we decided on Perch. 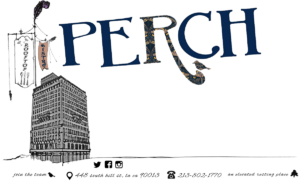 We drove into downtown LA and right up to the valet (Have you ever tried to park in LA?) in front of the Pershing Square building on Hill Street. The traffic was surprisingly light in the city. As we got out of the car our valet asked for a telephone number so he could send us a ticket. They send you a receipt with a link to click just before you leave so your car can be ready for you. The elevator took us to the 13th floor (of all things) and then another elevator took us up to the 15th where the restaurant was located. The elevator landing and hostess stand were outstanding, as if we have just gone back in time to Los Angeles of the past. We arrived about 45 minutes early, but were seated right away. The hostess showed us to a table for two outside on the patio right next to the railing where you can see the downtown skyline and practically reach out and touch the Title Guarantee and Trust Company building across the way. Our waiter David greeted us as we sat down and brought us some water and chatted us up a moment to see if we wanted to order a beverage. There was a pitcher of Red Berry Sangria on the menu, so of course we ordered it. It was delightful and hit the spot. 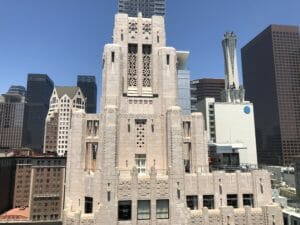 There were so many wonderful things on the menu, I wanted to try each and every one of them (Well, maybe not everything… the oyster bar looked great but that is definitely not my thing. Sorry Grandmother). We settled on the assorted breads and baked Brie as appetizers. The breads were a croissant, cranberry scone, and a Blueberry muffin, served with butter that was spreadable and a jar of Apricot preserves. The croissant may have been made in house (?), but the muffin and scone certainly seemed to be. It was a perfect accompaniment to the baked Brie. The Brie was wrapped up in a little bundle of flaky puff pastry and baked to perfection. It was served with an apple pecan slaw. We enjoyed our breads, Brie, and Sangria for a bit before we ordered our main entrée.


Ben loves a good Benedict and they had a Salmon Benedict that caught his attention. I was eying the crab cake Benedict when David had the nerve (wink, wink) to tell us there was a special today; Braised Beef Hash on top of Perch potatoes, and two eggs on top…. It was a difficult decision, but we decided to have all three. As Agnes Gooch said, “Live, Live, Live,” and we did.

The Salmon Benedict was served with Hollandaise that covered perfectly poached eggs atop a generous portion of smoked salmon, all served on an English muffin. This was accompanied by a side of Perch Potatoes, which are red skinned potatoes and onions pan-fried to a nice crusty golden brown. They rival the home fries my mother used to make in her cast iron skillet. Ben liked it immensely and commented that the Hollandaise was one of the better restaurant Hollandaise sauces (he raves about mine but that is another story). 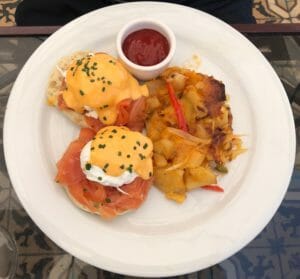 The crab cake Benedict was also delightful. The eggs were absolutely perfect. Poached eggs can be a bit of a trick when things get busy. It is very easy to undercook them so they are slimy or overcook them until they are medium to hard. These were cooked so the whites were fully cooked and the yolks were sufficiently runny to cover the crab cake. Mix that with the Hollandaise and the crab cake was quite snappy. Of course, the Perch Potatoes accompanied this Benedict. 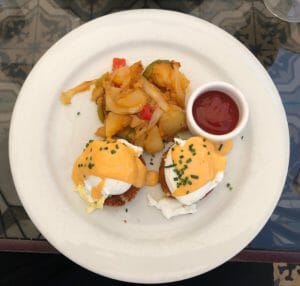 Now, all I can say is that the Braised Beef Hash was a homerun. Beef braised for hours until it melts in your mouth atop Perch Potatoes and tow sunny side up eggs and Hollandaise. I can still remember the taste of that first bite; it was absolutely heavenly. Obviously we didn’t finish all of our meal as it was way too much food. Still I am so glad we ordered the Braised Beef Hash. 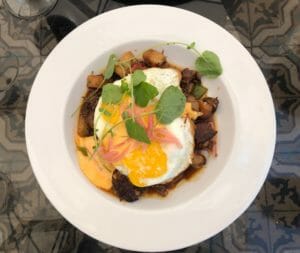 Since we were being naughty (As I always say, it takes a lot to keep this figure in shape…) we decided to have dessert. I am a sucker for Bread Pudding, but I always have to ask how they make it. I am very particular. David said it was good, so I ordered that. The Menu says White Bread Chocolate Bread Pudding with a caramel bourbon sauce. It was nice and crispy on the outside and moist on the inside. The glaze brought it all together for a nice finish with the last of the Sangria. 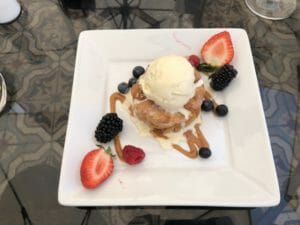 Ben wasn’t going to have anything, but he was talked into the Chocolate Pot de Crème. Wow! What a treat. It was served with berries and a candle for his birthday. The chocolate was very rich and thick and married perfectly with the accompanying berries. 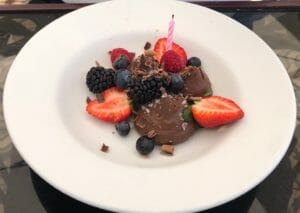 This was such a delightful experience having an incredible brunch on a rooftop in LA. There was a nice couple sitting next to us that we chatted up while we were enjoying our Sangria and meals. They were celebrating a birthday as well and seemed to be having a wonderful time. We were both sitting around sort of waiting until the jazz combo started playing at noon. We enjoyed a few minutes of that and decided to head to the top floor outdoor bar. 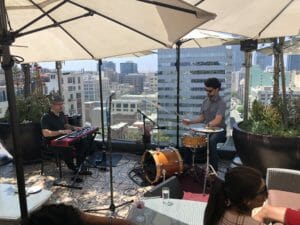 Our waiter David was very attentive and accommodating. I had forgotten to take photos of the breads and Brie so next time he had an order he stopped by and let me photograph them before whisking them off to where they belonged. The service was exceptional and the delivery times of the food could not have been better.

As we were leaving the Manager (Alessandro Scalora) asked us how our experience was and we told him it was perfect and indicated that we were headed to the roof to which he took us the back way; he told us to not wait for the elevator. He even poured us a complimentary glass of champagne on the roof. We enjoyed our bubbly in the shade on the roof and marveled that such a place existed. Perch is definitely a place to experience. We will be back and may even try to get in to the roof at night.


For enjoyable dining experiences Perch is going into our list of Top Ten Dining Places. Reservations are highly suggested for brunch and probably any other time for a good table. Valet is only $13 and it is well worth the effort. The outdoor patio is preferable to indoors, at least for me, but there is something charming about the old couches and tables inside. We will be back! 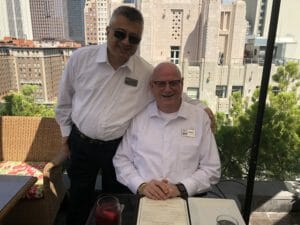 Oh, and by the way, the views are spectacular.