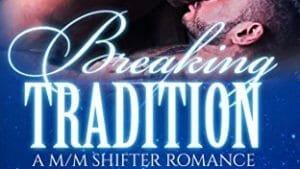 I’ll happily admit that I have my collection of books that I categorize as “guilty pleasures.” These are books that anyone of respectable taste and breeding should probably dislike, but have a quality that makes them appealing and fun to read. They range from simple gay romance to those that have that added genre twist to them, ranging from science fiction to paranormal. Am I proud of the fact that I have these books and enjoy reading them? Not entirely. To be perfectly honest, I find it embarrassing to be caught reading these books, and yet here I am about to report on yet another of my guilty pleasures. This time I’m looking at a book titled Breaking Tradition from author Noah Harris.

Derek lives in a very small mountain community. It’s so small it might resemble the areas that the first settlers had established hundreds of years ago. There are “tribes” that all live together and united in a bigger organization called a sept. Derek’s father is the leader of this sept, and he intends to see his firstborn son, Derek, be his successor. It does not help matters that Derek’s father is a somewhat abusive man. He’s the type of leader who rules by intimidation and not so much inspiration. This is not something Derek has been able to get behind, and yet he has been somewhat programmed to follow his leader, his father, blindly. Nipping at his heels is his younger brother Aron, who comes off as a clone of his father. Aron is strong and fierce, and something of a bully. Aron very much wants to inherit the mantle of leadership, and that is something that Derek is somewhat afraid of for he is quite afraid of letting his family down.

Derek’s life changes drastically when his father is notified that another “tribe” living in Denver CO has called upon his “tribe’s” services. The city is infested with some very unsavory people, who prey on the innocent, and the city “tribe” wishes for them to be eliminated, but they require help. Derek is sent to go down there, provide whatever assistance is necessary, and then return immediately, for his father has no wish to see his firstborn have his mind polluted by the city folk. Once Derek arrives he is greeted rather coldly at first. He is introduced to this group’s first Lieutenant named Sean, who patronizes him and insults him at every turn. However, others are quite kind to him. Stephan could be thought of as a drone in this group, but he has only shown kindness to Derek. Stephen is a widower and he is left raising his only son. While there Derek meets the leader of this city “tribe” and it starts to turn his entire world upside down in terms of everything he has come to know and understand in terms of what defines a true family.

I deliberately used some buzzwords here, especially the words “tribe” and “infestation.” I did so deliberately to give this synopsis a sense of almost universal accessibility. The simple fact here is that this is another one of those paranormal werewolf stories. Derek is a werewolf, and his father is not only the Alpha of his pack (which in place of pack I used the word “tribe”), but he is the leader of their sept. When he is asked to go to Denver to meet up with the pack that lives there the infestation they have to deal with is in actuality vampires. However, it’s the themes and the characters here that gave this book its charm.

Author Noah Harris has been writing books of this nature for quite some time now. The man is simply a machine with how he cranks these out, and yet I have never found a drop in quality with any of them, this being the sixth book of his that I have happily read. The fact that his characters have this paranormal quality to them is universal, but he never makes that the book’s focus. Instead, he chooses to emphasize their specific characters and personalities. His character writing is so strong and well defined that I actually found myself being able to visualize them in my head as well as hear different voices as I read all of the dialogue throughout this story. I have always said that a good book is like “theater of the mind,” and Breaking Tradition certainly exemplifies that idea. I found myself being able to see Derek in my mind as he was having arguments with his father, or some of the most innocent playful moments between Derek and Stephan’s son, Rico. There is also something else that I found remarkably refreshing, and that is the strong and healthy father/son bond between Stephan and Rico. The dialogue between this father and son is incredibly honest and genuine, and as I read it I could almost sense the love that Stephan has for his son, even though these are fictional characters. I am unaware as to whether or not the author Harris has any children of his own, but if he does then it clearly shows where he received his inspiration to write such wonderful moments between this parent and his child.

This brings me to the theme that most impacted me, and that is of family. We in the gay community have in years past struggled to find a place of belonging on an emotionally intimate level that families provide. While there is a greater acceptance today with young gay men and women coming out, it is not fully acceptable worldwide as there are still such young people who are being abused, and sometimes even kicked out of their families because of who they are. Derek’s sexuality is a minor element (he is gay), and although he does admit that his father would be disappointed because he is gay, he also acknowledges that it would not be the end of the world either. Instead, we see how he continually proves himself to be a disappointment to his father at not being the ruthless leader as his father. That same attitude keeps him out of step with the rest of the sept he lives with. It isn’t until he comes to Denver that things change for him. He does have problems with pack leader Sean, but even after some time, he starts to receive Sean’s respect. Derek does find the modern world a bit odd coming from an almost Amish type community where modern technology is eschewed, but after a while starts to see the convenience it can provide. Derek’s first taste of coffee with mocha is also a very amusing bit of writing, but what is most impressive is how Derek starts to realize that he doesn’t have to be anything other than his own person. He gains the respect of the others in that pack and they appreciate him for who he is, not or who he is being groomed to be. In doing so we see a story that illustrates what a family and acceptance truly means. In a marvelous short bit of dialogue where brother Aron is talking to Derek about their father, we see the following:

“He’ll never forgive you for this,” Aron told him.

Derek shook his head. “I gave up looking for his forgiveness already, because like his acceptance, I’ll never get it.”

While there are those that are considered family by blood, Breaking Tradition reminds us that we can find that “chosen family,” that we don’t have to force ourselves to conform to others wishes in a desperate desire to fit in and feel welcomed, but that we can find those like-minded people who not only accept us for who we are, but also encourage that journey of self-discovery.

Breaking Tradition is book 2 of a series titled “Heart’s Desire,” but it is only connected through themes and concepts, and not through story arcs. It is an independently told story and does not require reading book 1 of the series.

It was a wonderful story to read, and while I again admit to considering this a “guilty pleasure,” I also happily admit to being a big fan of Harris and his writing, and I always look forward to whatever he unveils next.

Breaking Tradition is available at Amazon.