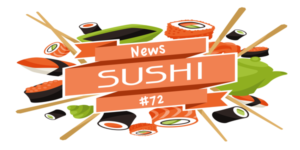 Hello all you beautiful people who like, read and share this little labour of love of mine.

I’m currently supervising putting together a work in progress cut of the time to send to a festival here in Japan. I’m also working with Deron on demos for the soundtrack, which I’m absolutely loving. I think the Christmas song her wrote for the film is probably going to be a new classic which will completely outlive the film!

If you remember last week’s BTS from Thea’s music video shoot, well, the song is available for download now…

And guess what? It’s made it into the US iTunes Dance top 10!!! Congratulations Thea!

So much rain… we have been having some massive downpours lately, so I’m glad that Chi-Yow Lee came up with this cool new dobbit cartoon – as the kids would say – it’s such a mood:

In some happy news, the Japanese election has finished for another year (they seem to happen all the time), and a gay politician has made it into the upper house (Senate/House of Lords) of the DIET (parliament). Hopefully, he’ll be able to start the conversation about marriage equality in this country.

This reminds me of the news in Wakayama where some 2000 year old seeds were discovered, and then lo and behold – when planted – they sprouted!

Gosh, all of us indie creators need a little confidence in our lives!

Actions you can do… Homestar Runner

Here’s some video footage of a festival in Gion recently. It’s always too hot down in the basin city that is Kyoto (hot, humid, and no air can get in or out)… but, that doesn’t mean that they locals don’t celebrate!

Every time you cover a tragedy, there are people who make the story and coverage better. So thanks to the Kyoto Police and Fire Department for actually talking to a foreign reporter, and for @Brian_Ashcraft and @rolandkelts for context and @JezebelKat https://t.co/PgA0Ua7BsX

It’s hard to talk about Kyoto and not mention this horrific incident. There are a lot of theories as to why it happened, which you can read about in the above article. I just want to say how heartbreaking this all is. All of those hard-working animators. All those families. What a waste.

Back to some good news…

And the Festival Director of Filmfest Homochrom (which I hope makes a comeback!): Martin