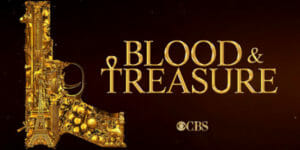 2000 years ago, Antony and Cleopatra, two of the most powerful people in the world, fell in love. Their relationship brought civil war to the Roman Empire and an end to the Ptolemaic Dynasty of Egypt. They were said to be buried together. Throughout the ages, their final resting place has remained hidden.

It is present-day and an Egyptian terrorist named Karim Farouk has been proving himself to be something of a nuisance to the myriad of law enforcement agencies around the world. He has been looting priceless archaeological treasures as a means of funding his efforts, but now he has his eyes on something beyond valuable. He has managed to steal the sarcophagus of Marc Antony and he is now hunting for Cleopatra, which has art dealers and museum curators in a frenzy since Antony and Cleopatra aren’t buried together as previously believed (Cleopatra’s sarcophagus has already been removed from their tomb). This comes to the attention of a billionaire named Jacob “Jay” Reece, who also has a museum or two of his own where he would love to set up a display for Antony and Cleopatra. However, Farouk’s efforts in stealing Antony along with his search for Cleopatra has thwarted Jay’s efforts, especially since it now appears that Farouk has managed to find a way to “weaponize” Cleopatra, and all he needs now is the sarcophagus containing Cleopatra’s mummified body. For this reason, Jay recruits a former FBI agent named Danny McNamara (who has reasons of his own for wanting to hunt down Farouk and bring him to justice), a man has become something of an antiquities expert, as well as sort of a foster son to Jay after his father went to prison. However, Danny realizes that in order to get ahead in this game he’s going to have to play “It Takes a Thief to Catch a Thief,” so he recruits his ex-girlfriend Lexi Vaziri (she has her agenda regarding Farouk, namely she wants to kill him for killing her father) in the hopes that they can find Cleopatra before Farouk does. Unfortunately, they are not alone as there is a secret society called The Brotherhood of Serapis and they are also after Cleopatra for their reasons.

As premises go, this show appears on the surface to have a very simple plot idea, and that is the rescue of Antony while trying to find Cleopatra. However, given that this is a CBS series, to simply boil it down to that would just be enough for a feature film, but this is a series that ran for 12 weeks (and the pilot ran two hours) so this means there needs to be plenty of padding in the form of mini-treasure hunts serving as pieces to the Cleopatra mystery puzzle, character backstories, and recurring characters who one day serve as assets to the mission, and then the next they are nothing but liabilities. The problem with this is that it forces the viewer to plant his or her tongue firmly into the cheek to be able to watch this. What also doesn’t help is that the story isn’t exactly told linearly. This series relies on flashbacks that take place all over the world, some involving Cleopatra while Nazis had her in their possession before the end of World War II, while other flashbacks inform us of the type of upbringing poor Danny had that resulted in him in becoming an unofficial part of Jay’s family. The series also presents characters that initially come off as almost trivial in the grand picture, but instead they turn out to be major players that completely turn the story arc on its side. If there is a complaint to be made it is largely with this point as the series is filled with red herrings. Normally I wouldn’t mind this, but some of these are major story ideas that either get dropped and never to be addressed again or are used to create a false tone for the series itself. I find this particularly distressing especially since Matthew Federman and Stephen Scaia, both of whom worked on the ultimate genre treasure-hunt series Warehouse 13, created Blood & Treasure. Still, this is a CBS summer series and not an attempt at creating a thrilling and sensible movie. Even Raiders Of The Lost Ark never employed that gimmick by remaining tonally consistent.

There are, however, some very strong elements in this series. First, there is the cast. Starring, as off and on treasure-hunting lovebirds are Matt Barr as Danny and Sofia Pernas as Lexi. These roles don’t exactly call for Oscar-winning acting, but the parts are enjoyable and it’s clear that both Barr and Pernas are having fun playing these characters. They truly come off as night and day with Danny more or less resembling an overgrown Boy Scout, and Lexi is initially quite the femme fatale. Even when Danny requests that she be a part of his team all those who are closest to him warn him of the dangers of doing so. This works because of the intrigue that Pernas brings to the part. She is very elegant and quite beautiful, and she makes it easy to believe that she is an international art thief. This again serves as a perfect foil for Danny, who otherwise might dry up and wither away from being just too two-dimensional. Barr plays the part well, but it’s the chemistry between Barr and Pernas that sells the show. 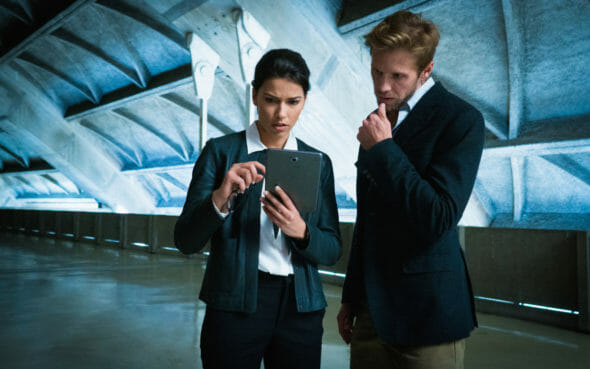 There are numerous recurring characters, but the ones who stand out are James Callis as Simon Hardwick (a shady character with plenty of intrigue all his own), Katia Winter as Interpol Agent Gwen Karlsson, Mark Gagliardi as Father Chuck (a priest working in Rome and best friend to Danny), John Larroquette as Jacob Reece, and Michael James Shaw as Aiden Shaw. What does work here is that some of these characters have very interesting arcs, most notably Gwen and Aiden, and both Winter as Gwen and Shaw as Aiden are simply magnificent. However, my favorite was Gagliardi as Father Chuck. He has a Brooklyn attitude that makes him enormously fun to watch, and throughout his delightfully comedic moments he manages to dispense some sage advice to those who need it, and Gagliardi plays Father Chuck so well that he would probably make people of all walks of faith run to him so that he may hear their confessions.

The last thing that makes this series enjoyable is the production value. Blood & Treasure was filmed all over the world, no doubt making it a very expensive show. However by doing this, it helped to give the show some honesty to it, otherwise, the execution of the storylines would have caused the series to completely sink.

Blood & Treasure is not a series to be taken seriously. Even as treasure-hunting shows go, this one needs to be taken with several grains of salt to enjoy it. However, if you can get past the bizarre misdirection and poor execution of story ideas, Blood & Treasure can be a fun show to watch. Strong production values, along with a decent cast, do make this series watchable despite its sometimes flimsy premise. Think of it as National Treasure meets Indiana Jones, but only with your brain checked at the door.

Blood & Treasure can be viewed on the CBS Streaming service, and on June 26, 2019 was renewed for a second season.