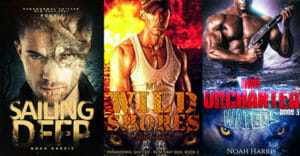 In another of my “guilty pleasure” book series, I’m now looking at the first three books of a 6-part paranormal Navy Seal series written by Noah Harris. 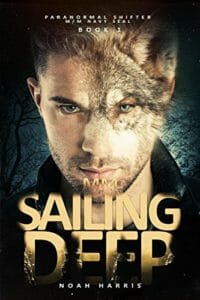 Dylan is part of an extremely elite branch of the military. Yes, he’s part of the Navy Seals, but the branch he’s in is even more elite than that. He belongs to a group of the Navy Seals that is made up of shifters, people who are able to shift into a specific animal. In Dylan’s case, he’s a werewolf, but his team also includes werebears and other assortments of animal forms. His team has been sent to investigate a questionable pack of shifters known as the Shadow Pack. Their mission is strictly reconnaissance and to report back if they feel this group is a threat to other packs, not to mention humanity.

Things go badly and he finds himself being captured by the military guard of the Shadow Pack, but he finds a surprising ally in a fellow werewolf named Blake, who convinces Dylan to masquerade as his mate. It is now that Dylan makes some interesting discoveries about the Shadow Pack, Blake, and most specifically, himself. 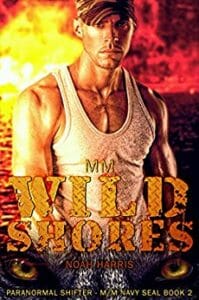 After having needed to escape due to some critical intel Dylan received during his undercover mission regarding the Shadow Pack, he has been off his game. His training has been suffering and everyone has observed that he just hasn’t been himself. Could it be the lingering feelings he has for Blake? Because of this, he’s “encouraged” to take a leave with the military. He chooses to go home because his cousin is getting married. However, it isn’t until after he arrives back in his home town (and pack) that he discovers his cousin is marrying his ex-boyfriend Ben, who happens to be the older brother to none other than Blake. The situation becomes even tenser when Blake suddenly appears. It turns out that he’s one of Ben’s groomsmen, but hilarity ensues when Ben lays eyes on Dylan and decides he likes what he sees in his ex, but he becomes incredibly angered when he learns that Blake is proclaiming himself to be Dylan’s boyfriend. Oh, and wouldn’t you know it, Dylan is pregnant (Male omegas in packs can get pregnant. Who knew?)! 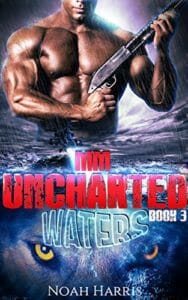 Dylan and Blake have settled into domestic bliss now that their daughter Lily has been born. Dylan is even on paternity leave when he receives an urgent call from the Navy Seals that he just couldn’t refuse. Now he’s on a mission to investigate another questionable group of shifters known as the Blood Pack, and once again he’s been captured, only this time instead of being treated well as he was during his time with the Shadow Pack, he is now being tortured for information. Meanwhile, Blake is feeling incredibly distraught with the knowledge of his missing mate. This causes him to make a very bold decision, and that is to go back to the leader/alpha of the Shadow Pack, a dragon shifter named Arulean in the hopes that he can rescue Dylan from the Blood Pack. There is one tiny wrinkle. The leader of the Blood Pack is a female alpha dragon shifter named Lyphnia, who has an irrational hatred of humans and also happens to be the mate to Arulean.

Now while there are more books to this series, I’ve chosen to focus on these first three, for they tell one very complete story regarding Dylan and his character arc. Even though these books have their narrative rooted in the POV of both Dylan and Blake, it’s Dylan who has the biggest emotional journey. When we first meet him he’s happy being a Navy Seal, but he agrees to play the role of Blake’s mate to maintain his cover while hiding with the Shadow Pack, but as the series goes on we see him start to change and come to terms with his feelings regarding Blake. What’s also fun about these three books is that they are nothing alike in tone. They do have the commonality surrounding the relationship between Dylan and Blake, but there is a complete story going on in each book that makes them unique. The first book is something of an espionage story, but more deals with the unusual relationship forming between Blake and Dylan, all the while attempting to gather intel to determine if the Shadow Pack is a threat to security. The heart of the second book deals with Dylan and his family. Here is where the greatest character growth takes place for Dylan as he tries to come to an understanding of what he’s feeling for Blake as well as coming to terms with being pregnant with Blake’s child. For people who enjoy good character-driven stories, this one will stand out. Dylan is still bitter over how he was dumped by his ex-boyfriend Ben and now he has to stand by and watch his ex marry his cousin. I always enjoy books with strong character development that drive the story, and author Noah Harris has picked up on thoughts and emotions that do more than just ring with the truth. Anyone who has been unceremoniously dumped, only to see that person with someone else, will recognize the hurt and anguish that Dylan goes through in seeing Ben. But Harris takes that additional step by having Ben find himself suddenly attracted to Dylan all over again (After all he is a Navy Seal and has become quite the built and buffed man, despite being an omega.), which puts Dylan in a very uncomfortable situation since he does have some unresolved feelings for Ben’s younger brother Blake. What comes out of that almost screams of a soap opera, but Harris never allows it become too maudlin, and instead draws upon the wolf-like characteristics combined with the human discipline that both Blake and Dylan have to give this story an intriguing emotional edge.

However, if plot-driven stories are your cup of tea then Unchartered Waters will be the story to grab you, as this is your basic “caught behind enemy lines” hostage tale, and Harris weaves a story that is anything but boring. It is intense. By introducing a paranormal element whereby bonded mates have some sort of “telempathic” connection with each other, the story takes on an even greater personal tone for both Blake and Dylan as they can sense each other when Blake, as he’s accompanying Arulean to Lyphnia’s Blood Pack, infiltrate the pack’s compound. Dylan feels fear for Blake that he’ll be captured and there will be no one to care for their daughter, and Blake is almost driven to despair when he can feel the torture that Dylan is being forced to endure at the hands of Lyphnia’s team. Harris writes these characters with such emotional intensity that when Blake and Dylan are finally reunited (Harris’ stories tend to have happy endings.) there is such an emotional release that it brought tears to my eyes. Then he turns everything on its ear and creates a story that had me holding my breath as I read page after page after page concerning their attempted escape.

I don’t know what else to say about Harris except that he’s a machine. I’ve never seen anyone produce books on this scale. What is even more impressive is that despite the similarity in that many of his books are paranormal stories dealing with shifters, no two books of his are alike. They are each as unique as fingerprints, with characters who pretty much bear no resemblance to anyone else in his collective works. He has also shown that he can even write in different genre styles as well. Wild Shores is a domestic romance tale, but Unchartered Waters is practically a spy thriller, but each one of them is connected with these two characters. The stories show the growth that Dylan and Blake have so by the time we come to the end of the third book we might find ourselves cheering them on so that they will have their “happily ever after”. It should also be pointed out that these books have VERY steamy love scenes in them. No one under 18 should read them. These stories are clearly for adults.

How Harris continues to write such fun books is a mystery, but it is one that I’ll happily accept. He has crafted fun stories of the shifter genre that continually delivers interesting characters along with exciting storylines. If you like stories with interesting characters and fast-paced plots, then Paranormal Shifter – M/M NAVY SEAL might very well be for you!

You can purchase this entire series here.