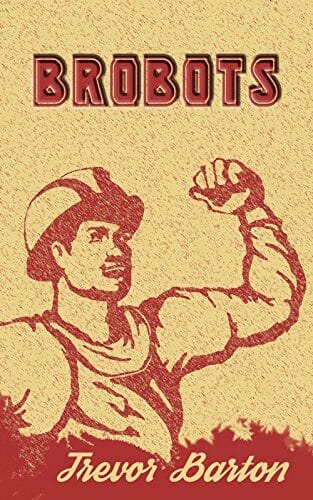 We’re entering the latter half of the 21st Century and mankind has advanced quite a bit in terms of technology. Humanity has even gone so far as to create advancements in the realm of artificial intelligence, and even create robots with limited sentience called “Brobots.” They provide a variety of services including construction on work sites. One day a Brobot named Byron has a system failure and just falls to the ground. He’s left there by the human crew to be picked up and possibly even disposed of later, but along comes a human named Jared who decides to take him home and try to repair him.
Jared is a complicated fellow. In addition to being gay and not able to find a worthwhile relationship, because of some emotional trauma he suffered when he was very young, he developed a deep-seated desire to fix things, so when he sees a non-functioning Byron he feels he must try to get him operational again. He also finds Byron quite attractive. After some unusual things happen he does get Byron fixed, but what comes from that opens the eyes of both Jared and Byron.
Brobots is the first book in a trilogy that deals with artificial intelligence, and it’s the first book from author Trevor Barton. For a debut novel, he has decided to take on this heady subject that has provided such fertile material for TV shows like Star Trek as well as the Philip K. Dick short story Do Androids Dream of Electric Sheep? which gave rise to the sci-fi movie Blade Runner. This is no easy task. How does an author go over familiar territory and keep it fresh, and how does a first-time author actually capture the concept of growing sentience in an artificial life form? Despite those challenges, Barton has written something that became quite fascinating to read. Using the “omniscient” POV (meaning the reader is privy to the thoughts of all the characters in the book), Barton bounces back and forth between Jared and Byron as their relationship starts off with Jared being Byron’s rescuer, to becoming friends, to then actually falling in love with each other. In an interesting exercise of contrast and comparison, the book takes turns peering into the thoughts of these two main characters as their emotions develop, especially in the case of Byron. His self-analysis as he tries to come to grips with his new thoughts and emotions is both interesting and amusing but never taken too lightly. This relationship between Jared and Byron becomes the heartbeat of this book, which is very important because there are many other things going on. Through a simple little investigation done by Jared’s friend Yana (who starts off as a small-time journalist) uncovers something of a conspiracy that rocks many of the world governments, which then gives rise to a social and political movement to allow all sentient Brobots to have full citizenship and rights, which brings about its own fall-out. Barton also does something else that is quite sneaky. In true science fiction form, he uses the plight of the Brobots as a metaphor for LGBTQ rights. There are a couple of subtle moments when there is a mention or two in passing, but in one scene with a physical altercation Jared pretty much spells it out against some drunkard in a gay bar. There the message is spelled out and sticks with you throughout the remainder of the book.
I did find Brobots to be somewhat uneven in its pace. Chapters jump in a slightly jarring manner from one character, or set of characters, to a different place on the globe, and sometimes those chapters are a mere few pages long. There is also the occasional advancement of time as the book flashes forward anywhere from a day to several weeks or more. These aren’t quite as jarring and can be deemed as necessary in order to forward the plot in a manner that is believable. Still, the magic of this story rests with Jared and Byron. Even as other Brobots (or Bros as they like to refer to themselves) are liberated and are attempting to acclimate to that newfound sense of freedom, there are Jared and Byron who both provide their experiences and knowledge to these Bros.
For a debut novel, Brobots is a very good read, especially considering its ambitious content. It does have sequences of sexuality so it is recommended for adults only.
Brobots can be purchased on Amazon, and the entire trilogy can be found in the collection Brobots: The Complete Source Code.