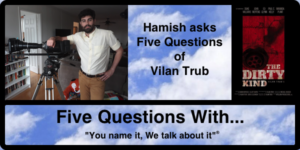 My father said, "let me take a picture." I agreed to the picture, not the smile. #filmgear #filmmaking #indie #supportindiefilm

TGG: We’ve got a special one for you today. Could you introduce yourself to our readers?

VT: My name is Vilan Trub and I’m a filmmaker.

TGG: Could you let us know about your latest film, “The Dirty Kind”?

VT: “The Dirty Kind” is a neo-noir that follows Raymond, a young private investigator specializing in divorce, as he gets too ambitious and takes on a case that involves more than just snapping pictures of cheating couples. While searching for the estranged daughter of a client, Raymond discovers that she works as a stripper under the name Natalie Cottontail. Natalie’s exploits bring together a desperate collection of lost souls–sucking everyone down a drain of corruption and doom.

I wanted to make a crime-thriller, a “noir” movie. I’d previously made a movie, Susie Q, that was inspired by the French new wave and was black and white and stylistically did things that aren’t necessarily general audience, or any audience for that matter, friendly. It was a freshman effort and although I’m proud of the fact that I made the movie, it was not at the level of what I felt I was capable of. I’m a student of cinema and also study filmmakers and their careers. I remember watching Stanley Kubrick’s first movie, Fear and Desire, then the follow up picture, Killer’s Kiss. In interviews he explained how after the failure of his first movie, a very philosophical and artistic tale, he decided to do something rooted in a genre. Something with more action that could better entertain audiences. I felt this was a good idea, using a genre as a spring board. A genre movie comes with a built in foundation that you can work off. I love the crime-thriller genre and living in Queens, NY had access to a wonderful outer-borough to film such a movie.

The way I write is rooted in research. I love to watch movies and documentaries, and very much love to read. I read through the bibliographies of Raymond Chandler, Dashiell Hammett, and James M. Cain then started to go deeper. I read true crime books covering The Westies and mafia figures. I also looked to graphic novels by Frank Miller, specifically his run on Daredevil and his work on Batman. Miller understands how to show the worst out of a NYC street. All streets can be good or bad, depending on what moment of the day you happen to be walking by. Miller knew how to capture the bad moments very well.

I wanted to understand both the private investigator trope and what it meant to be a career professional. We have ideas of what a criminal does, but unless you’ve been behind the desk at a job for 10 years, you don’t really know the details. We think a gangster intimidates someone by breaking their thumbs. You quickly learn that there’s far more creative and effective ways to demoralize a person.

Once I understood the characters I’d be creating, I started putting them in a world and a situation. Anthony Weiner lived a few blocks from me and we all remember his story. Having a politician caught in a predicament as a result of adultery felt like a great starting point for a story that sees people from different cultural parts of the borough go down a drain.

TGG: What inspired you to become a filmmaker?

VT: I grew up with seven movie theaters in walking distance. It’s what we did growing up. My mom would take my sister and I to the movies on weekends, when I got older I went myself or with friends. If you live across the street from a beach you go swimming. I lived across the street from Midway, and back then they were all single screen theaters are at most, twins.

I also always remember seeing movies on TV, on WPIX. They had 8PM movies during the week and matinee movies on weekends. It felt like it was always the same movies playing too, like The Wraith or Short Circuit

There was also the video rental stores like West Coast Video, also across the street. Every Friday I was in there renting movies and starting with well-known movies then before long digging for anything interesting. I’d watch anything I could get my hands on.

It was during high school that I started to realize that I wanted to make movies, and that was from the realization that I COULD make movies. I just purchased Mean Streets, never seen it before. I watched it and was blown away. Not just because it was an amazing movie, but because this was a movie by the director who made Goodfellas. I knew Scorsese and knew him as a big Hollywood director with budgets and crews and everything. You never imagine being able to make that movie. When I saw Mean Streets it looked like something I could make. It was filmed on the streets and in apartment building stairwells. Even though it wasn’t my neighborhood it was all very recognizable and familiar to me and it didn’t look like a big Hollywood movie.

It looked like a camera and some actors and something I could do. That’s when the feeling of wanting to make movies, not just watch them, took hold.

In college I took my home family video camera and moved into a magic shop on Queens Boulevard for a week. I didn’t know what I was going to film but I just knew I needed to get used to filming stuff and the shop and the people who hung out there seemed like an interesting bunch. That week taught me how to not be afraid of filming something. To be a director you need to be a leader, you need confidence. I learned how to get what I want and needed, in terms of footage. Over the course of the week I spent less and less time asking, and more time telling.

I then got an unpaid internship with a guy through Craigslist. It could have been a disaster but I was a nobody and needed to learn, anywhere the lessons would come from. The experience was interesting, unprofessional to say the least, but the person I worked for actually had a great background in the industry. My dedication led to him hiring me when he started getting real projects again. It wasn’t long before I was turning 21 while helping shoot a music video at 50Cent’s house. It’s not where I expected to turn 21 but looking at my watch at round midnight I couldn’t help but think about how cool it was. This was the house, after all, my dad and I knew for being Mike Tyson’s house and we were big fans. It still featured a neon “Club TKO” sign in the club section of the mansion.

I continued working with the producers, even helping make Before I Self Destruct, another 50 Cent vehicle. At that time, I started to feel that the current path I was on was going nowhere. It stopped being cool, the money wasn’t great, and all of the promises that I’d be able to direct my own work became transparent as a ploy to just keep me working. I walked away.

I took whatever money I had saved up, bought my own camera and other equipment and started filming on my own. I realized, if no one’s paying you good money, do it your way. I made my first feature film, Susie Q, and did it my way. For all of its flaws, I’m very proud of the movie and ultimately it served as a lesson on how I want to make movies in the future, what to do, not do, and what to think about.

I’ve been doing it my way ever since and with THE DIRTY KIND I feel I’ve reached a professional level as a writer, producer, director, etc. I have the confidence, experience, and understanding of how to not only start a 3-ton train but keep it moving forward, even when no one else is there to help you pull.

TGG: Wow, thank you so much for sharing your path with us! Could you tell us about your upcoming projects?

VT: I’m in production on a movie that is part stand-up comedy special and part documentary on mobocracy and mainstream authoritarianism.

TGG: Wow! That sounds amazing! Finally, where can we support you (follow you on social media, buy your stuff etc.)

And check out The Dirty Kind on Amazon or DVD. Now available in the UK. Link here: 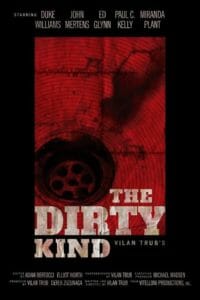 TGG: Thank you so much for your time!