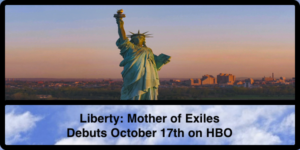 The Two Gay Geeks received this press release form our friends at HBO PR. A new and exciting documentary on the Statue of Liberty, with a look at the history and the enduring symbol of hope.

We look forward to watching this documentary and hope you will join us in celebrating one of America’s greatest symbols.

Let us know what you think in the comments section below. As always, we welcome your feedback and input on all of our published content. Thank you.

LIBERTY: MOTHER OF EXILES,
A SURPRISING AND REVEALING LOOK AT THE HISTORY AND CONTEMPORARY
SIGNIFICANCE OF THE STATUE OF LIBERTY,
DEBUTS OCTOBER 17, EXCLUSIVELY ON HBO

Directed and Produced by Emmy®-award winners Fenton Bailey and Randy Barbato; Executive Produced by and Featuring Diane von Furstenberg, “Godmother” to the Statue

Over four million people visit the Statue of Liberty annually. The most photographed statue in the world, the statue’s meaning is universal and represents freedom, hope and protest to people throughout the world. LIBERTY: MOTHER OF EXILES, debuting THURSDAY, OCT. 17 (9:0010:30 p.m. ET/PT), casts new light on one of America’s most familiar symbols, revealing its little-known history, and celebrating it as an enduring beacon of hope for generations of immigrants.

The documentary will also be available on HBO NOW, HBO GO, HBO On Demand and partners’ streaming platforms.

Directed and produced by Emmy® winners Fenton Bailey and Randy Barbato (HBO’s Emmy®-nominated “Mapplethorpe: Look at the Pictures” and “Carrie Fisher: Wishful Drinking”), the documentary begins with the groundbreaking ceremony for a new museum at the base of the Statue of Liberty, and follows legendary designer Diane von Furstenberg, “godmother” to the statue, who led the museum’s fundraising campaign, in her quest to discover how sculptor Frédéric Auguste Bartholdi’s dream became a reality and what the statue has meant to generations of people worldwide. The film reveals the statue’s unexpected history – a story filled with many false starts as well as significant financial and technical challenges that were ultimately solved in innovative ways.

“Making this documentary on the history of the Statue of Liberty, and discovering the layers of passion that made it happen, has been an emotional journey,” says Diane von Furstenberg. “She truly is the symbol of freedom and her torch is a magic wand!”

“Lady Liberty, chains broken and striding forward, has become the symbol of the struggle for freedom all around the world,” say directors and producers Fenton Bailey and Randy Barbato. “As the ‘Mother of Exiles’, she welcomes millions of immigrants seeking a better life in America. This film could not be a timelier reminder of the values that the statue has always stood for.”

Like most Americans, Lady Liberty has its own immigrant story and, over the course of the film, von Furstenberg, who came to the U.S. from Belgium, reveals how intimately connected her background is with the statue. Her admiration for Lady Liberty began with her mother, who gave birth to Diane after surviving the Auschwitz labor camps and often called her daughter her “torch of freedom.” The fashion icon has long admired the 305-foot, toga-wearing statue’s strength and femininity and recalls first seeing Lady Liberty when she arrived in New York by boat in the 1970s.

The film follows von Furstenberg on her journey towards discovery, reading French sculptor Frédéric Auguste Bartholdi’s diaries, and traveling to France to meet with descendants of Édouard de Laboulaye, who inspired Bartholdi to build the statue, and Gustave Eiffel, who designed its metal framework.

The ways in which the statue’s existence affects Americans is palpable through encounters with dozens of people, like those von Furstenberg spoke to, who share a connection to the colossal figure. From street artists to factory workers, the film’s robust cast of characters include a French metal artisan who came to America to work on the restoration of the statue in the 1980s and never left, workers in China who make the souvenir statues found in gift shops all over the world, a Russian graffiti artist whose street art prominently features the statue, and families who lived on the island for years until their homes were destroyed by Hurricane Sandy – all underscoring von Furstenberg’s notion that Lady Liberty “belongs to everyone,” as well as Bartholdi’s own idea that the statue should represent the unity of mankind.

Additionally, we meet others who help shed light on Lady Liberty’s past, present and future, including: Bartholdi biographer Robert Belot; Statue of Liberty Museum architect Nicholas Garrison, Statue of Liberty Director of Education Peter Wong; activist Patricia Okoumou, who scaled the statue in 2018 to protest the Trump administration’s immigration policies, students from ELLIS Prep Academy in the Bronx, which serves recent immigrants to the city from around the world; and many others.
Although it’s hard to imagine the United States without the Statue of Liberty, which celebrates its 133rd birthday later this month, its existence was far from assured. Were it not for the determination and ingenuity of a few key individuals, and the thousands of ordinary people who helped fund it, the statue might never have come to be. Its role as a galvanizing symbol of freedom and a beacon to the world’s “huddled masses, yearning to breathe free” has far surpassed its original intentions – but is never one to be taken for granted. As von Furstenberg says, “The Statue of Liberty has always been a story of the people.”
Fenton Bailey and Randy Barbato are the founders of World of Wonder Productions. In addition to the Emmy®-nominated “Carrie Fisher: Wishful Drinking,” their HBO and CINEMAX credits include the Emmy®-nominated “Mapplethorpe: Look at the Pictures,” as well as “The Eyes of Tammy Faye,” “Monica in Black and White” and “Party Monster.”