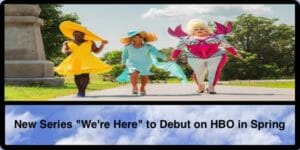 The Two Gay Geeks received this press release form our friends at HBO PR. It look fascinating and while the details are few at the moment we will be watching and waiting for more and bring it you as we get it.

Let us know what you think about this concept int he comments section below. As always, we welcome your feedback and input on all of our published content. Thank you.

NEW YORK, Nov. 5, 2019 – WE’RE HERE, a six-part unscripted series that recruits small-town residents across America to participate in a one-night-only drag show, will debut this spring on HBO, it was announced today by Nina Rosenstein, executive vice president, HBO programming.

In each episode, renowned drag queens Bob the Drag Queen, Eureka O’Hara and Shangela Laquifa Wadley will inspire and teach their own “drag daughters” to step outside their comfort zone for a night of no-holds-barred, full-on drag.

“Drag is about confidence and self expression,” says Rosenstein, “We are so thrilled to showcase the transformative power of the art form with our audience.”

WE’RE HERE will be available on HBO NOW, HBO GO, HBO on Demand and affiliate portals. 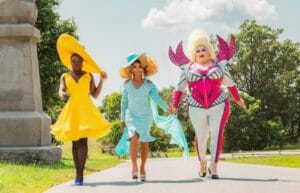