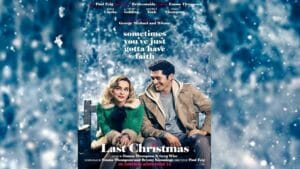 When I was asked if I wanted to see this film, I was curious. From the trailer, it appeared to be a fun and charming romantic comedy centered around Christmas. I like Emilia Clarke and the cast looked fantastic with such greats as Emma Thompson and interesting lead Henry Golden of Crazy Rich Asians fame. I was hoping the movie would live up to the trailers. It was so much more than I expected, with a plot that twists the romantic comedy on its head, an incredibly talented and diverse cast of memorable characters, and Henry Golden steals every scene he is in while Emilia Clarke is funny and sweet.

The film, directed by Paul Feig, written by Bryony Kimmings and Emma Thompson, centers around Emilia Clarke’s character Kate, whose life is a mess. She’s been kicked out of another friend’s flat, doesn’t want to live with her controlling mother (Emma Thompson), works in a Christmas shop with a boss, Santa (Michelle Yeoh) who is disappointed in her, a sister, Marta (Lydia Leonard), who is fed up with her, and her attempts at auditions for singing parts are going nowhere. She’s recovering from an illness but won’t take care of herself. Enter Tom Webster (Henry Golden).

Tom charms her and takes her on a tour of London, convincing her to see the unusual and hidden parts of it. They spend time together and Tom encourages her to spend more time looking around at the world around her. She even calls her father Ivan (Boris Isakovic), a cab driver, to take her home. Then Tom begins disappearing for days at a time. Kate searches for him but in the process, finds herself, peace with her family, repairs her friendships and begins giving of herself at a homeless shelter. But will all this matter if Tom breaks her heart?

Not only is the story completely unpredictable but so are the characters, both major and secondary. Kate and Tom are both unusual and quirky but so too are all the secondary characters. Each is memorable, distinct, and has a moment to shine in the story. Santa, Kate’s boss, has a romance with an older gentleman who visits the shop. Marta has hidden secrets of her own. Kate’s mom sings her daughter to sleep at night. Her father fights with her mother but also picks up Kate in his cab when she calls. There are police constables who show up multiple times in the film that steal their scenes with sly humor. And all of the characters are part of weaving the overall story, brought together in the final scenes.

The plot is unconventional in terms of the normal romantic comedy. Tom and Kate’s relationship doesn’t culminate in any of the ways you would expect and that is part of what makes this film so brilliant. It is very unusual to have a romantic comedy that you can’t predict the ending and yet, this one manages that feat. If you pay attention, you may figure out the truth of the story but the execution of each scene that provides clues to the ending is so well executed that it is a delight to witness. The story is beautiful and also manages to incorporate traditional Christmas elements into the romance, adding love, hope, family, and friends.

Beyond the story, the music woven into the story adds an interesting touch. Using the song that reflects the title of the film, the bittersweet “Last Christmas” by George Michael, the writers also weave into the story other songs by the singer, adding music that touches upon the story and creates an unforgettable soundtrack, one that I thoroughly enjoyed.

Emilia Clarke imbues her character with warmth, growth, humor, and soul. Kate is not perfect which Emilia captures but she is engaging and witty and she begins to find her path, she brings beauty and soul. Henry Golden as Tom is charming, quirky, and absolutely steals every scene he is in with his gentle humor and grace. He plays his part so beautifully that he is the perfect leading man for this role. The other actors are equally talented, each one adding dimension and humor to the story. Every part is necessary and every actor is funny and charming in their own way.

If you like romantic comedies with heart or the perfect Christmas movie, I completely recommend Last Christmas. It is charming, has a fantastic soundtrack, talented acting, and leads that completely captivate you from beginning to end. I wasn’t expecting such a beautiful story but I’m so glad I got to see this movie. It is the only Christmas movie you’ll need this year.