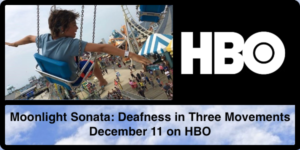 The Two Gay Geeks received this press release form our friends at HBO Media Relations. It is an amazing story of triumph.

I am very interested and moved by the subject knowing a number of folks who have challenges hearing.

Let us know what you think in the comments section below. As always, we welcome your feedback and input on all of our content. Thank you. 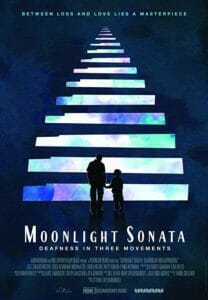 A deeply personal and moving intergenerational story of a close-knit family’s experience with deafness, MOONLIGHT SONATA: DEAFNESS IN THREE MOVEMENTS explores the meaning of loss through the stories of a deaf boy growing up, a deaf man growing old, and perhaps the world’s most famous deaf person, Ludwig van Beethoven, who crafted a sonata that would resonate across time and cultures.

Directed by Oscar nominee and Emmy® winner Irene Taylor Brodsky (HBO’s “Beware the Slenderman”, Oscar nominated “The Final Inch” and Peabody-winning “Hear and Now”), MOONLIGHT SONATA: DEAFNESS IN THREE MOVEMENTS debuts WEDNESDAY, DEC. 11 (9:00-10:30 p.m. ET/PT), ahead of Beethoven’s 250th birthday, which will be celebrated by cultural institutions across the world in 2020.

The documentary will also be available on HBO NOW, HBO GO, HBO On Demand and partners’ streaming platforms.

Brodsky’s son Jonas began going deaf as an infant, later undergoing surgery for cochlear implants as a toddler and finally rediscovering a world of hearing — and music. Now 11-years-old, Jonas sets out on a musical journey to tackle the first movement of Beethoven’s “Moonlight Sonata,” an anguished composition Beethoven wrote when he himself began going deaf.

MOONLIGHT SONATA: DEAFNESS IN THREE MOVEMENTS expands upon Brodsky’s first feature documentary, “Hear and Now,” which followed her deaf parents’ journey into the world of sound, after they decided to get cochlear implants. Jonas’ grandparents, Paul and Sally, have been deaf for nearly 80 years, but unlike Jonas, most of their lives were shaped by silence.

The film intimately highlights the intergenerational and complex relationship between Jonas and his grandparents. As Paul and Sally reflect on their own experiences with deafness, they help Jonas better understand loss and the difficulties of straddling two distinct worlds – one with sound and another with silence. Along the way, they explore the gulf of time and technology that lies between them, often having a hard time relating to their grandson whose experience with deafness has been so different from their own.

Faced with yet another transition, Paul, a former engineer and inventor, now 79 years old, becomes increasingly forgetful and frustrated. As Jonas navigates his own deafness and Paul’s dementia, Beethoven’s process of writing “Moonlight Sonata” and unearthing creativity from loss serves as a poetic analogue.

Beethoven’s story is told by entering a nineteenth century world alive with haunting watercolor imagery and luminous animation, emotional soundscapes and original score and witnessing Beethoven descend, painfully, into the loss of something that gave him so much beauty. 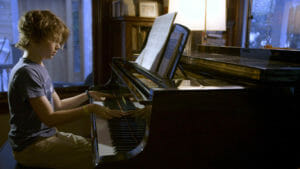 MOONLIGHT SONATA: DEAFNESS IN THREE MOVEMENTS explores the meaning and interpretation of deafness, language and music through three unique experiences. Like Beethoven, grandfather and grandson must tune into the voice inside themselves to survive a world that was not built for them, discovering what lies beyond loss.

The film had its world premiere at the 2019 Sundance Film Festival.