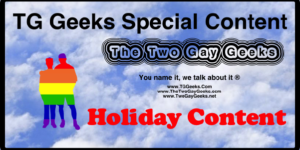 As we enter into this holiday season we have decided to share once more many of the articles we have previously published at this time. We will be taking a much-needed break soon, but we still wanted to have content for you to read during that time. Again, some of these articles will touch on classic movies and TV shows, while others are off-beat and loosely associated with the holidays. We hope you enjoy our offerings and that your holiday season is safe, sane, and satisfying.

As the holidays approach we all fall back on some favorite traditions. Old ones fade away while new ones appear. One such tradition is a specific TV episode that deals with a young couple wanting to try something new…

The Thanksgiving episode for NBC’s Mad About You has Paul and Jamie making the choice to host this year’s family gathering. Paul’s parents will be there, as will Jamie’s parents, plus a few friends. They have it all planned out. They even got up at “dark o’clock in the morning” to start cooking the turkey in the oven before going back to bed. And so it begins… Jamie’s sister Lisa has decided to become a vegetarian simply to irritate her parents, and even though Jamie has gone out of her way to make cranberry sauce from scratch as well as a sweet potato moose, Paul’s parents have their own idea on what makes a proper Thanksgiving meal… “but this is okay.” Unfortunately, when Paul and Jamie are both out of the kitchen, while the turkey is on a carving table, their dog Murray hops up there and starts eating away at the cooked bird. Paul and Jamie come back in and it’s a disaster. They contemplate telling their parents the truth, but like adults, they decide it will be better to trick them, so they go out to buy an already prepared turkey. Unfortunately one does not leave an unattended turkey in a hallway in Manhattan. It’s a fact. Jamie picks up a second turkey. Unfortunately while trying to smuggle it into their apartment she finds herself about to be surrounded by parents so she rids herself of the bird in a most unconventional way. In her own words, “I panicked!!!” Two attempts later, filled with even more outrageous comedy, dinner is finally served.

I saw this episode of Mad About You back in 1994 after it had first aired. I had come home from California after visiting my own family and it was really late at night as I fired up the VCR to watch what I had missed. What I saw in this episode clearly became one of the funniest bits of comedy in the last 30 years. I laughed so hard I grabbed a nearby pillow and covered my face lest I wake up my neighbors on the other side of the wall. Three years later I found this episode on TV after Keith and I got together. When the one magic moment of pure hysteria was about to arrive I called Keith over and had him watch it. He stood there. The moment came. I turned to look at him. He was on the floor laughing so hard he could not breathe. From that moment on this episode became OUR Thanksgiving tradition.

We all try to create the perfect holiday gathering for our ourselves, our friends, and our family. “Giblets for Murray” is a lovely reminder to stop, take a brief respite, and LAUGH! It will make your Thanksgiving traditions so much easier!!!