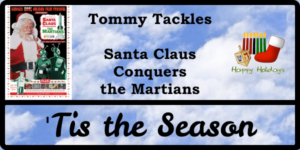 The Two Gay Geeks and our Staff are continuing on with our holiday madness…. errrr cheer as we bring more share another movie from the Christmas Closet. Some of our selections are classics and others are off-beat and (very) loosely associated with the holidays. We hope you enjoy our offerings and that you holiday season is safe, sane, and satisfying. 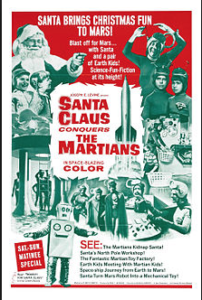 The movie Santa Claus Conquers the Martians is flat-out terrible, it’s painful, it’s awful. That’s what makes it so fun, the title itself almost says it all. “Conquer” is the wrong verb for its plot, but it makes the piece more compelling, I’m glad they used it. The movie suffers from low-budget scenery, costumes, and a laughable robot that appears to have been constructed from the cardboard box that delivered the props. The acting is mostly stiff, the editing keeps the film moving at a sluggish pace. The character of Droppo the Happy Martian is the most annoying thing to happen in cinema prior to Jar Jar Binks. The character of Santa goes from being the classic jolly, old Saint Nick to becoming a more streetwise Santa, with snark. The film is so bad that ends with an on screen Christmas card image and a follow-the-bouncing-ball-sing-along in which we sing “Hooray for Santy Claus”, not misspelled.

However, there is true joy in watching this movie with the right group of friends. It is prime for creating your own improvised home version of MST3K. The low quality mixed with the mid-1960s aesthetic make it a delightful experience. Make sure the egg nog is extra strong and the spirits are high before pressing the play button.

Now, this film also had an album release and a comic book adaptation. I cannot speak for the album, but the comic book is actually pretty good. The art is on point. The absurd story plays well in the comic book medium. We read the comic at our own pace and we aren’t held back by any ne’er-do-well film editors. It’s colorful and well crafted all around. The best part is that the comic book has no sound. HOORAY! As cheap as the film was, I’m sure that producing the comic took even less money. That’s the power of comic books. There’s something in the medium that allows us to indulge in stories that are totally bonkers. And, you don’t have to waist a million, or even a thousand dollars to make one. 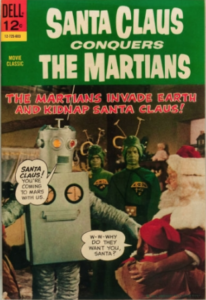