After watching the trailer for this movie, I really wanted to see it. Combining three dynamic actresses with the intriguing story of how they took down one of the most powerful men in news, it certainly sounded like a film that would be both insightful and interesting. After seeing the movie, I found it every bit as dramatic as I’d hoped, tackling harassment with emotional performances and deft writing, highlighting female strength and courage as the women involved in this story grapple with what it means to tell the truth.

Directed by Jay Roach and written by Charles Randolph, Bombshell stars Charlize Theron, Nicole Kidman, and Margot Robbie, and is based upon the accounts of several women at Fox News who set out to expose CEO Roger Ailes for sexual harassment. Actors John Lithgow, Kate McKinnon, Connie Britton, Malcolm McDowell, and Allison Janney appear in supporting roles. The movie weaves the voices of three women, Megyn Kelly (Charlize Theron), Gretchen Carlson (Nicole Kidman) and fictional character, Kayla Pospisil (Margot Robbie) together to create a narrative about how the women of Fox News speak out against the toxic environment they have endured. 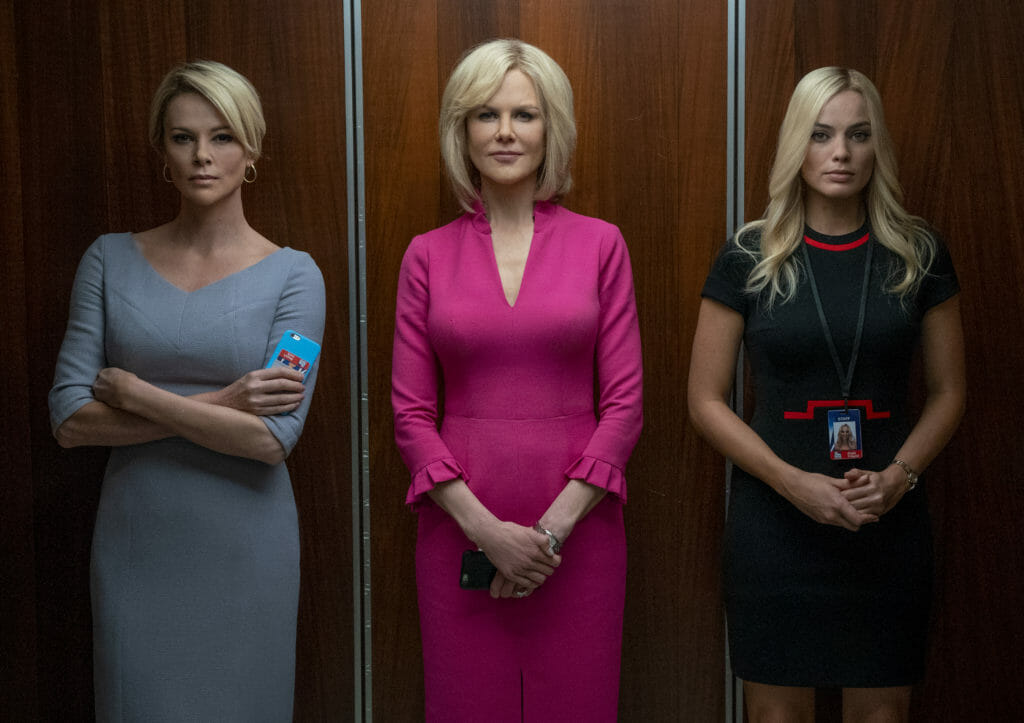 Beginning with Megyn Kelly and her controversial questioning of Donald Trump and his treatment of women, we are slowly introduced to Fox News and how the news organization runs, including the power that resides in Roger Ailes (John Lithgow). We soon get drawn into the lives of the other two women, Gretchen Carlson, once the anchor of Fox and Friends and eventually demoted to a less desirable slot, and newcomer, Kayla Pospisil, passionate about working for Fox but struggling to find her way. Gretchen is the first to come forward with no real way of knowing if anyone else will back her accusations. But soon more harassment and other women come forward, including Megyn Kelly, who had no real reason to take a stand, risking her career and her name, to tell the truth.

What makes this story so incredibly compelling is the spotlight it takes, not on Fox News alone but on the voices of women who have the courage to speak out against harassment. This was just before the #MeToo movement and this watershed moment is one of the factors in the beginning that movement as women found their strength and stopped remaining silent in the face of this kind of toxic environment. I personally have never found myself in this situation but as a woman, I can empathize and applaud the bravery that it takes to face up to this kind of situation. This was ongoing, constant deflection, women who were demeaned and treated as objects to be used by someone in a position of power. This kind of situation should not happen to anyone, anyplace and it was an explosion when it was exposed.

The writing reflects that understanding, the bombshell that was dropped as women came forward. But the writing is handled deftly to engage not just women but men as well. Not all men are shown in a negative light and even Roger Ailes is shown in a far more complex light. There are many of the women who come forward, including Megyn Kelly, who liked the man. He was known for his generosity but it was also known not to get on his bad side. That ability to convey the complexities of the story is why this movie is so engaging. The story also illustrates how much women blame themselves, question whether they are in the wrong, the massive amount of victim-blaming that happens, especially if they do give in to their attacker. Those moments in the film, when the women grapple with those questions are the most emotional.

The performances are intense. Charlize Theron immerses herself into the character of Megyn Kelly. I really didn’t find myself thinking of the actress, she was so incredible in how much she became the character. Her performance was intense. Nicole Kidman was dynamic and intelligent as she conveys Gretchen Carlson’s narrative. Her voice was strong and compelling. Margot Robbie was powerful, raw, and emotional, her voice the one I empathize with the most. John Lithgow was equally interesting as Roger Ailes. He manages to convey the complexity of the man and while it is difficult to like the character, his performance is stellar. Beyond the main actors, Kate McKinnon was humorous as Jess Carr, with hidden truths to her character, Allison Janney as Susan Estrich was excellent, and Connie Britton as Beth Ailes did not have enough screen time. All of the actors were powerhouses, even for secondary characters.

My only minor critique is that at times the narrative is slower and jumps time periods. While that does help keep the action of the story moving, it does create spaces where the story does drag as you catch up with the storyline. Despite that, the writing is incredible as it helps portray how women often feel that they have to hide pieces of themselves, truths, and stay silent to maintain their jobs and livelihoods, even with they may seem to have power and how difficult it was for each of the women involved in this scandal to find their voice and speak up.

If you like female-driven narratives, powerful performances and are interested in a story that sheds light on one of the most incredible scandals in recent times, I would urge you to go see this movie. The actresses give us award-winning performances, the story is powerful, and the insight into the Fox News organization is compelling. It does deal with sexual harassment, so do be aware of possible triggers but watch it for the power it gives to the female voice.