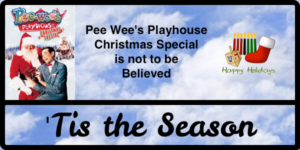 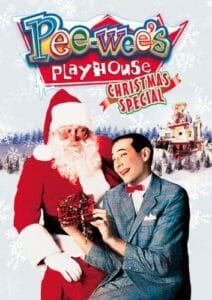 What else can be said but Oh My God! I never watched Pee Wee’s Playhouse because it just didn’t appeal to me. While some of the Pee Wee shtick has fallen into common use and I have occasionally used “the laugh” I do not pretend to even remotely understand the attraction.

However, I took one for the team and watched this special… The opening is a stop motion winter scene and then devolves into Pee Wee’s Playhouse where for the next what seems like 7 minutes (but is only 4) the guests on the show are introduced and what appears to be the Marine Corps Choir (actually it was the UCLA Men’s Choir dressed in Marine Corps attire) sing Christmas in the Playhouse.

The guest list was outstanding but nobody had any screen time to speak of except K.D. Lange while she sang Jingle Bell Rock. Whoopi Goldberg, Oprah Winfrey, and Joan Rivers are only on a screen talking to Pee Wee. Magic Johnson has 30 seconds and his segment was recorded in just under an hour because he was supposed to play that evening. Cher’s segment of 30 seconds was recorded in 25 minutes because of a tour going on. Grace Jones has a little more than a moment to sing a portion of Little Drummer Boy in her inimitable way and Little Richard has a bit more time being taught how to skate. Annette Funicello and Frankie Avalon have a couple of scenes together the first of which is simply awful because of the dialog they are forced to recite. Charo is delightful (but I have a fondness for her, she is so over the top) when she plays and sings Feliz Navidad. Dinah Shore is on a screen singing The 92 days of Christmas and is even the last scene of the special. Zsa Zsa Gabor appears for her 30 seconds and is wonderful as only Zsa Zsa can be. There is even a Dreidel segment featuring dinosaurs. Oy Vey!

Other than that it is a typical Pee Wee’s Playhouse episode with the usual characters. Basically wishes for so much for Christmas there are no toys for anyone else. Pee Wee relents and then goes off to deliver the gifts with Santa.


It clocks in at 49 minutes and for me it was 48 minutes too long. The one saving grace was the copy I watched (we have it on DVD somewhere but I wasn’t going to look for it) was from an actual broadcast from WBAY in Green Bay, Wisconsin that I found on Youtube. It must have been recorded on the actual air-date since the commercials were still intact with an Isotoner Glove commercial, several Lego commercials and Extra Sugarless Gum being among them. There was even a commercial for The Land Before Time as well as the Claymation Christmas Celebration (which we featured in a review by Tommy Cannon) and The George C. Scott A Christmas Carol (featured here in a review by Ben) and since Wisconsin was Best Buy country a commercial featuring an answering machine for $69.99.

I suppose if you are a Pee Wee Herman fan, this is the bee’s knees or something like that. But, since I am not a fan I needed a nap after watching it.