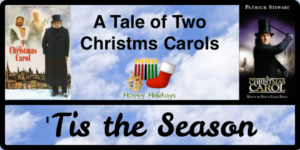 By now we are all very much familiar with the Charles Dickens classic story A Christmas Carol. It has been told and retold countless times that practically anyone can recite the story. The number of TV and movie versions has also reached the point of being ludicrous, and yet we turn to it year after year when the Christmas season comes around. With that, there are two productions that Keith and I love to watch annually, yet these two have some interesting differences. 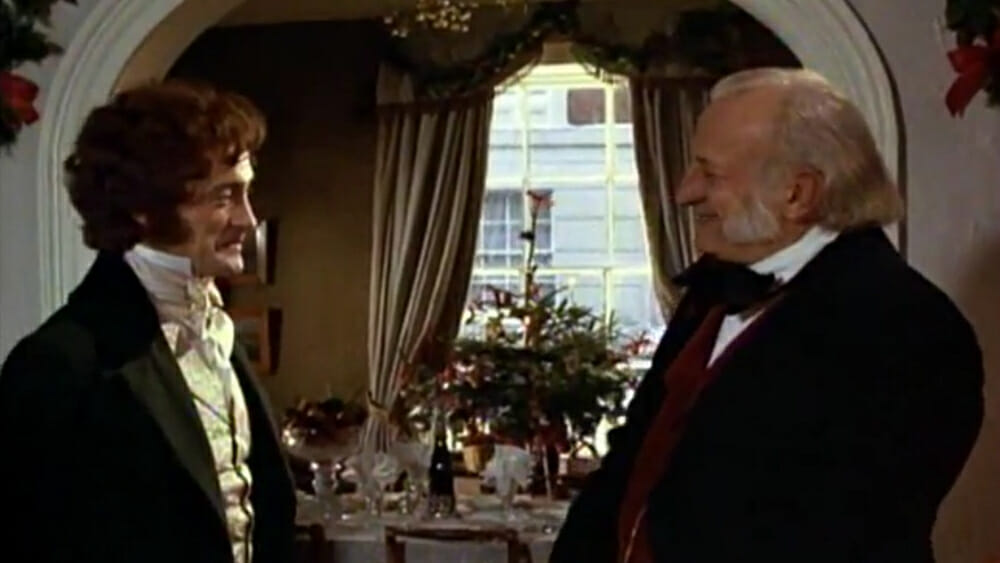 In 1984 Academy Award Nominee George C. Scott was taking on the role of everyone’s favorite curmudgeon Ebenezer Scrooge. Alongside would see essentially an all star cast consisting of Angela Pleasence as the Ghost of Christmas Past, Edward Woodward as Ghost of Christmas Present, David Warner as Bob Cratchit, Susannah York as Mrs. Cratchit, Michael Gough as Mr. Poole, Mark Strickson as young Ebenezer, and Roger Rees as nephew Fred Holywell. There are undoubtedly some literary licenses taken here including a scene where Scrooge meets, compliments of Ghost of Christmas Past, the love of his life when he was much younger, only now she’s an adult, married and has children. There is also a much earlier scene where we see the shrewd businessman Scrooge while at the Stock Exchange. There are others, but the one thing that stands out is the polish in which this movie is made with. 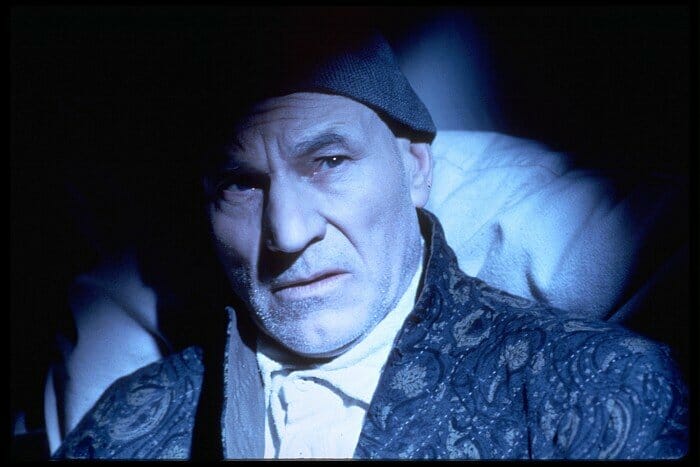 Now the second version I wish to address is from 1999 starring Patrick Stewart. He had already made a huge name for himself doing a one man stage play of this Dickens classic, and wherever he performed it would sell out. No doubt he was still riding the waves of popularity from playing Picard in Star Trek: The Next Generation, but audiences were continually wowed by the power in which he played all the parts showing his depth as an actor, so it was natural for him to play the part of Scrooge for TV.

The actors, while they are quality talent, mostly don’t have quite the name recognition as the 1984 version with George C. Scott, save for Joel Grey, who won an Oscar and a Golden Globe for his supporting role in Cabaret. The rest of the cast are quality actors that some people might recognize here and there. As Bob Cratchit there is Richard E. Grant (probably the only time he plays a sympathetic character), Desmond Barrit as the Ghost of Christmas Present, Dominic West as nephew Fred, Saskia Reeves as Mrs. Cratchit and Ian McNeice as probably the best Fezziwig I have ever seen. Most of these actors would show up in sci-fi programming, where Richard E. Grant did a stint on Doctor Who, Dominic West was in John Carter, and both Reeves and McNeice would appear in SyFy’s Dune (McNeice also appeared in Doctor Who).

Name power aside there are other story differences that take place here. Missing is the scene where Scrooge sees the adult version of his old girlfriend. Also changed is the scene where Scrooge goes to Fred’s house to accept his nephew’s invitation to Christmas Dinner. In the 1984 version Scrooge arrives there quite early before everyone else does, making for a more private moment between Scrooge, Fred, and Fred’s wife. Patrick Stewart’s version is more in line with the 1951 Alastair Sim telling where he shows up while Fred and his guests are already dining and Scrooge approaches Fred’s wife to apologize for being an old fool, to which he is invited to join in on the dinner and the merriment afterwards.

Except for a few artistic differences with the story, the spirit of both these movies remains intact, and both contain some brilliant performances, especially on the part of Scott from ’84 and Stewart from ’99. Their respective scenes upon learning that they are doomed to die soon if they don’t change their ways is bone chilling. As for the additional cast, there are some preferred actors from one production to the other. Edward Woodward (who replaced Leo McKern) from ’84 has a fun portrayal, despite that it doesn’t feel authentic to the Dickens’ actual dialogue. While Barrit’s performance from the 1999 version does feel more in line with the story, it lacks some of the acerbic wit that Woodward brings. Then there is the Ghost of Christmas Past. While Pleasance does a respectable job working opposite Scott, seeing Joel Grey sharing scenes with Stewart make those moments from the 1999 film an acting treasure. Then add one of the past sequences with McNeice as Fezziwig and it becomes extremely clear why Scrooge thought so highly of the man in his youth. He was a good businessman, but he knew how to laugh and have fun, plus this version does a beautiful job at showing the love that he has for his wife.

Both casts in their movies are outstanding, but the one thing that really separates the 1984 version from the 1999 is the polish. The 1984 telling has a Hollywood type gloss on it. Except for the scenes with those that are destitute, everyone looks absolutely fantastic, especially the Cratchits. Both David Warner and Susannah York are accomplished British actors, and unfortunately it shows. They don’t come off as hard working class, rather they seem to be in the same economic class as nephew Fred (living situation notwithstanding). They are wonderfully groomed and are well clothed. Even their teeth look spectacular. 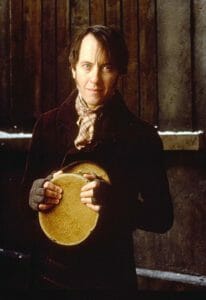 However the 1999 version shows something entirely different. They look like they’re living in squalor. Their clothes are torn, they are barely presentable, and both Cratchit parents have terrible teeth, giving a more accurate representation of what that time period might have been like. It’s easy to have a rather romantic feel of that Victorian Era, but the truth of the matter is that it wasn’t like that. It was a bit more gritty, and the street markets weren’t exactly up to present day health codes. In the 1999 version we see that. While the production values here are more modest (although Marley’s Ghost is more accurate here through CGI than in the 1984 movie), they at least try to tell a more honest story with its setting.

Whichever version of A Christmas Carol becomes your favorite is strictly up to you. There are so many different versions out there, ranging from comedy to a more recent one that is definitively LGBTQ, that it’s a virtual smorgasbord for you to choose from. What unites them all is the story that Christmas is not a humbug, that there are people in the world and in your own community that do embrace the true meaning of Christmas, and that we are better human beings when we let that spirit live in us just as Scrooge finally did, in almost all of the versions out there!