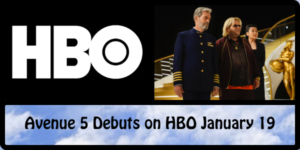 The trailer we ran previously make this series look like a real fun romp in the comedic sci-fi universe.

Let us know what you think and if you intend to watch this new series in the comments section below. As always, we thank you for your feedback and input on all of our published content. Thanks for stopping by. 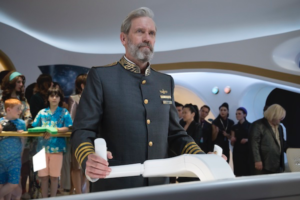 Created by Armando Iannucci of “Veep,” AVENUE 5, debuting SUNDAY, JAN. 19 (10:00-10:30 p.m. ET/PT), is set 40 years in the future when traveling the solar system is no longer the stuff of sci-fi fantasy, but a booming, multibillion-dollar business.

The series stars Hugh Laurie as Ryan Clark, the confident and suave captain of “Avenue 5,” a space cruise ship with luxury amenities like gourmet buffets, a spa, an observation deck and yoga classes. As the series begins, Avenue 5’s eight-week journey around Saturn is underway and its systems are optimal. But when the ship suddenly encounters technical difficulties, it’s up to Ryan and his crew to calm the disgruntled passengers and find a way to deal with unexpected events onboard – though they may or may not be equipped for the task.

Episode 4: “Wait A Minute, Then Who Was That On The Ladder?”