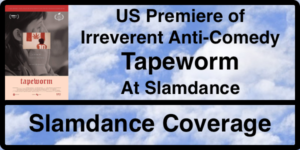 The Two Gay Geeks received this press release from our friends at Chicart PR. Tapeworm has played at Vancouver International Film Festival and now comes to Slamdance Film Festival for a US Premiere.

This looks like an interesting, albeit, bizarre film about seemingly unconnected individuals.

Let us know if you will be attending Slamdance Film Festival in Park City, UT.

Let us know what you think in the comments section below. As always we welcome your feedback and input on all of our published content. Thank you for stopping by. 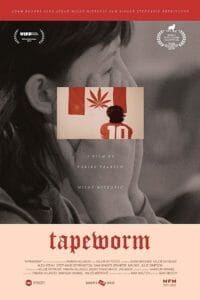 US Premiere at Slamdance Film Festival

(Park City, UT) – January 14, 2020. Tapeworm, the feature debut by Canadian filmmakers Milos Mitrovic and Fabian Velasco is having its US Premiere at the Slamdance Film Festival.

The film that Screen Anarchy calls a “cringe comedy” introduces a loosely connected group of nobodies who trudge through their tedious existence in the dreadful city of Winnipeg. In just over 77 minutes, we observe the daily activities of a hypochondriac, a dull comedian, a loner and his mother, as well as two naive stoners. These less than ordinary characters seek a distraction from their pitiful and mundane way of life.

“We were interested in exploring the lives of people on the fringe of society, the ‘beautiful losers’, and share their every day moments, with all their pain and very few triumphs, filtered through our own pessimistic and ironic sensibilities,” explains co-director Fabian Velasco.

“But amidst the grey, the beige apartments, the sad pink carnations, the secondhand panties, and the disappointment is a bright, warm humor,” adds Sarah Diamond, director of programming at Slamdance.

Both screenings are followed by a Q&A with the filmmakers Velasco and Mitrovic, along with actress Alex Ateah, cinematographer Markus Henkel as well as producers Ian Bawa and Kevin Tabachnick.

The ultra low budget film was almost entirely self-funded by Velasco and Mitrovic and shot on 16mm film, in their hometown Winnipeg, Manitoba.

“Tapeworm was heavily influenced by the city of Winnipeg, a city in the middle of Canada, covered in dirt and depressing architecture, and although it’s not necessarily a film about this city, it captures the bittersweet nature of living in Winnipeg,” co-director Milos Mitrovic concludes.